Diablo Wiki
Register
Don't have an account?
Sign In
Advertisement
in: Diablo Immortal NPCs, Heroes of the Storm, Necromancers

"The enigmatic Necromancers hold a belief that all Creation exists in a delicate balance between Light and Darkness. Should either side gain control, the world of Sanctuary would fall into ruin. As a member of their ancient order, Xul fights to preserve that balance — no matter where his travels may take him, or what foes stand against him."

Hailing from the southern swamps, long hours of study in dank mausoleums made Xul's skin pale and corpselike, his figure, skeletal, and most people shunned him for his particular looks and ways. Though his goals were often aligned with the forces of Light, some did not think that these ends could justify his foul means.[1]

"I briefly traveled with a necromancer in the past. Through that experience I have come to believe that the priests of Rathma can be powerful and trustworthy allies to have at one's side in these uncertain times."

Xul allied with a group of fellow heroes, and pursued the Dark Wanderer — a vessel for the Lord of Terror. It culminated with the defeat of the Prime Evils, but also much loss, including the destruction of the Worldstone.[2] Despite the warnings of the Horadric scholar Deckard Cain as to what the event might portend for Sanctuary, the heroes disbanded and returned to their homes and families.[3] Despite this, Cain would look favorably upon Xul in later years.[4]

Now a master necromancer, Xul returned to the Priests of Rathma cloaked in foreign garb. He chose to mentor an apprentice, a promising student named Mehtan.[5] Mehtan looked favorably upon his master and continued to seek to preserve the Balance.[6]

At some point, Xul took Lethes as an apprentice. However, their relationship was strained, and Lethes believed that Xul was jealous of her, seeking to suppress her potential. Xul, in return, noted that Lethes had a disregard for life, and taught her at least one "painful lesson." Eventually, Lethes abandoned the Priests of Rathma.[7] She would later claim that Xul had attempted to kill her, but could not (or would not) do it.[8]

"Lethes, stop this! Your wanton disregard for life ends here. You will be brought to justice..."
"Xul...how I tire of your jealous attempts to suppress my potential. No. Now, with the power of the Worldstone at my command, I will obtain true dominion over the dead. Your entire lethargic order will be swept away and replaced by one with the ambition to reshape this corrupt world. You are a relic, old man, and you are no longer needed."

Xul caught up to Lethes in Ashwold Cemetery, where he found her torturing a member of the Wortham Guard. She revealed that she was seeking the power of the Worldstone, and wanted to know the location of Queen Asylla's tomb. She summoned undead minions to cover her escape, as the creature attacked Xul. He was aided by a group of heroes, whom he thanked for their aid. He headed after Lethes, while leaving them to tend to the wounded guard.[7]

Xul found the body of Asylla's handmaiden, killed by Lethes. He was joined by the heroes he had encountered earlier, before summoning the woman's spirit. The handmaiden revealed that she had been tortured into revealing the tomb's location, before Lethes had killed her. She in turn revealed its location to Xul and the heroes. Xul told the heroes to pursue Lethes, while he remained to ensure that the handmaiden's body was properly interred.[9]

Xul caught up with the heroes at Ashwold Manor, having traced a surge of energy to the structure. There, he and the heroes discovered necrotic barriers errected by Lethes, along with a trio of Golems. He ordered the heroes to destroy the Golems in order to lower the barriers.[10]

Xul confronted Lethes outside the manor, where she was summoning Asylla's spirit. They engaged in a battle of wills, with Xul trying to disrupt Lethes's summoning (Lethes herself was inside the summoning circle, and apparently immune to harm). She intended to use Asylla's spirit as a conduit to gain ownership of Leoric's soul, and through it, the power Diablo had left behind. Xul's allies arrived, and while they were able to defeat the simulacrum Lethes summoned, they couldn't harm her. Xul ordered them to enter the manor and slay Leoric, which in doing so would break the tether.[8]

The hero(es) were successful in breaking the tether, but outside, history repeated itself, as Xul found himself unable (or unwilling) to kill Lethes. She, however, was perfectly willing to wound him and flee. The hero(es) returned, and Xul told them what happened. He refused to be tended to and sent them off in pursuit of his former apprentice. Xul followed after them, arriving in time to see Lethes explode in a torrent of blood. However, he was skeptical that she was dead, stating "no body, not dead." He resolved to follow after her, and thanked the hero(es) for their trouble.[11]

Xul can be regarded as being the canonical representative of the Necromancer in Diablo II.

Xul appears in Diablo Immortal as an NPC in the Ashwold Cemetery questline.

For detailed information, see the respective article on the Heroes of the Storm Wikia.

"From the recesses of the eastern jungles comes a man cloaked in mystery. As a member of the secretive Priests of Rathma, or the Necromancers, Xul fights to preserve the delicate balance between order and chaos. Using powerful death magic, Xul will sap the strength of his enemies, block their escape, and direct his spectral scythe with lethal accuracy. Those who fall before the Necromancer find no peace even in death, rising again as skeletal servants bound to do their master’s bidding."

Xul appears as a male representative of the 'Necromancer' class in Heroes of the Storm.

He retains ability to apply a Curse on hit (implied to be Weaken), as well as Poison Nova, ability to Raise Skeletons and even Skeletal Mages, cast Bone Armor and Bone Prison. He can potentially learn Bone Spear, and his talents include Decrepify, Corpse Explosion, Amplify Damage and Skeleton Mastery.

He carries a dagger and a spectral scythe. His appearance is slightly different from that in Diablo II, possibly result of his age. 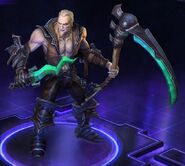 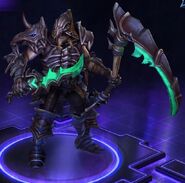