View source
watch 02:16
Who is the Witch Doctor?
Do you like this video?
Play Sound

"I wander to places beyond imaginings, far from the jungles of my youth. My knowledge has grown vast. The people, they think me banished -- shunned to the end of my days. They say I defy the spirits. But I say no, I follow them. The spirits show me alone that the sky-fire is where the end begins. They say this must not be. I live to serve the spirits, so I go. There is none but me to answer the call."

Most believe Witch Doctors to be figments of legend.[1] Indeed, few outlanders have encountered a Witch Doctor in the flesh without losing their own.[2] In truth, the role of a Witch Doctor is a hallowed one in Umbaru society, though only a few men and women can ascend to the position for they must possess both a history of battle and a talent for communing with spirits. The latter ability belongs solely to those born with the touch of the Unformed Land.[3] The Witch Doctors are finely attuned to this realm and are able to train their minds to perceive this reality through a combination of rituals and the use of selected roots and herbs found in the jungles of their homeland. They call the state in which they interact with this other world the "Ghost Trance".[1]

Witch Doctors frequently wear masks, hiding their identities. Through this, they are said to be an aspect of the spirits of the Unformed Land.[4]

When a person dies, Witch Doctors feel what they suspect is the breath of life leaving their cooling body. And, when calamity or genocide sends hundreds to their graves at once, Witch Doctors can sense their trembling and shrieking from beyond. They cannot avoid hearing this—they must restore the balance between their world and the Unformed Land, or watch the torment of generations past for the rest of their lives...and forever after.[3]

Witch Doctors are spiritual warriors who summon dead souls and crawling creatures to do their bidding. By surrounding themselves with a mix of conjured zombies and vermin, Witch Doctors are free to assault their enemies with exploding skulls, acrid poison clouds, and wasting curses. Through their connection to the Unformed Land, Witch Doctors are able to tap into mana. Although some Witch Doctors avoid melee combat in favor of augmenting their pets and crippling their enemies from afar, they are also more than capable of slaying weakened foes with their own hands. This includes the use of mojos and enchanted ceremonial daggers. Unlike common knives, these blades are honed towards one purpose – human sacrifice – and so they are well-suited to ending lives.[3]

The Witch Doctor is classified as a "dark class," or "pet class."[5] Their tribal culture reflects the combat capabilities, as most of the skills are grim and outworldly in nature. They draw on Mana for their abilities. Mana regenerates slowly, so Witch Doctors have to choose what abilities to cast with care, resulting in bursts of immense damage. Unlike most of the other classes their main resource, Mana, increases in maximum capacity at every character level, gradually increasing their ability to unleash a lot of damage at enemies in a quick initial burst before falling back and letting their pets finish the job.

Witch Doctors mostly rely on Cold, Poison and Fire damage, with some Physical skills in their arsenal. They are the only class to really benefit from Poison skills.

The Witch Doctor's specialized skill sets are categorized as Terror, Decay, and Voodoo. Many of the Witch Doctor's skills bear some resemblance to those of the Druid and Necromancer. Witch Doctors rely heavily on Damage over Time skills and summoned pets, as well as curses that destroy their opponents' ability to fight back (and humiliate them as well). Pets are a good way to keep engaging enemies without the cost of using Mana. An advantage of this skill system is that the Mana pool allows the Witch Doctor to use multiple, powerful abilities over a short period before the mana is depleted.

Witch Doctors are also able to cast debilitating abilities on their enemies, actually being the best class in Crowd Control: they can Hex, Fear, Confuse and Slow enemies in large numbers. Combined with pets who shield their master, a Witch Doctor can kill a horde of enemies without ever casting a damaging spell.

"What I like the most about the witch doctor is I really felt like the team was unified in the vision for that character, so when I got to animate it, I had so much information to pull from that I felt it happened naturally."

The Witch Doctor was, in the words of Jay Wilson, "championed by the art team." It was also the easiest class to nail visually.[7]

It was quickly agreed during development that the Witch Doctor should be quirky, creepy, and a little scary. Feathers, body paint, and painted wood were settled on as the class's base materials. Developing the Witch Doctor's large mask was a turning point in its development, and remained an iconic component of the character design.[8] 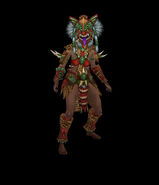 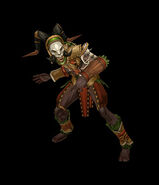 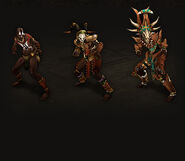