Wings of Lempo are a set of wings that were released for Diablo III in Patch 2.6.4. The wings can only be obtained by completing Chapter IV of Season 16 Journey.

Their appearance is similar to the wings of a Monarch butterfly.

Lempo was among the most beautiful of demons, until he lost his wings. 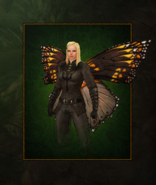 Xbox One patch 2.6.0 (modded)
Add a photo to this gallery

Retrieved from "https://diablo.fandom.com/wiki/Wings_of_Lempo?oldid=188550"
Community content is available under CC-BY-SA unless otherwise noted.