Start a Wiki
For the Diablo II set amulet, see Angelic Wings.
Wings of Justice (a.k.a. Angelic Wings or Eternal Light) are a PC-exclusive vanity item for Diablo III. They are only available to players who have purchased a Collector's Edition of Diablo III.

When used, they apply or remove "a display of heavenly power": glowing angelic wings, blue like those worn by Tyrael.

When obtained, they can be added to Wardrobe. Only one set of Wings can be equipped at a time. If equipped, they will be visible even in character selection screen.

They shine with the power of the eternal conflict.

"Ten thousand strong, the angels burst forth from the clouds and fell upon the gathered army of the underworld, tearing it asunder with their savage weapons." – The Book of Jarl, Volume IV 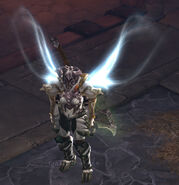 Retrieved from "https://diablo.fandom.com/wiki/Wings_of_Justice?oldid=188603"
Community content is available under CC-BY-SA unless otherwise noted.