Start a Wiki
watch 01:19
What is Whimsyshire?
Do you like this video? 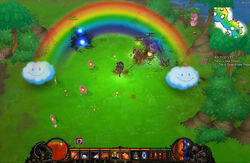 Whimsyshire (a.k.a. Pony Level) is an easter egg level in Diablo III, similar to the Secret Cow Level of Diablo II. The enemy monsters featured here are flowers, unicorns, and teddy bears. The level itself is created in a style different from the rest of the game, the map having been drawn to look like a child's painting. Normal world objects, chests, health globes etc. are replaced by toys, happy clouds, sweeties etc. The monster death animations, however, remain as gory as in the rest of the game.

Monsters are also specific to that zone:

Whimsyshire was originally made as a response to criticism regarding the game's graphics being "too cartoon-like" and "too bright".

A dark version of the Whimsyshire layout may appear in Nephalem Rifts, regardless whether you have been to this level or not. The Dark Whimsyshire may or may not come with its monsters.

A nearly identical zone exists called Whimsydale, which only appears if one kills a Rainbow Goblin, and is the only place one can obtain the Cosmic Wings. Despite the similarities to Whimsyshire, in Whimsydale the happy clouds and lovely presents will drop gold, gems, and items significantly more often.

Whimsyshire can be accessed through the following steps (Note: as they have become account bound, these items cannot be collected from other players):

Talk to the Ghost of the Cow KingEdit

As of version 2.0, any Staff of Herding will allow access to Whimsyshire on any difficulty. Previously, though, to access Whimsyshire on higher difficulties (nightmare, hell, inferno), the Staff of Herding must be upgraded. To do so, plans must be acquired from the quartermaster near your followers in Bastion's Keep in Act IV (Prime Evil, before killing Diablo), but you must defeat Azmodan on the difficulty above the plan you wish to acquire before the merchant will sell it (e.g. kill Azmodan on Hell to purchase the Nightmare plan). In the PS3 version, the player must kill Izual in their current game before the plans for that difficulty will be available from Gorell. However, for Inferno plan, you have to complete the game on Inferno difficulty. Only the previous Staff of Herding is required to craft the newer staff, but it costs a substantial amount of gold. Once you have upgraded your staff, it can still be used to access the lower difficulties. Once upgraded, the name of the staff will change. 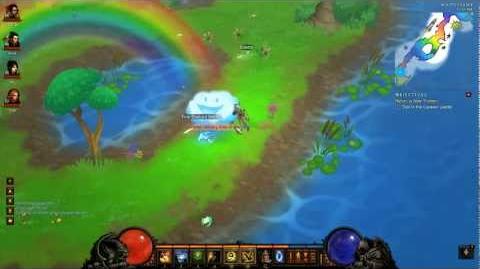 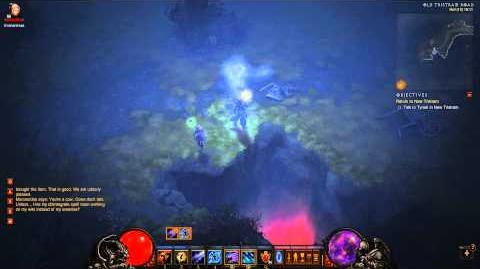 Easy road to Whimsyshire
Add a photo to this gallery