Westmarch Soldiers are encountrered everywhere in Westmarch City in Act V of Diablo III. They are the city's guards (members of the so-called Rakkisguard, named after Rakkis), as well as soldiers of the Westmarch's regular army.

There are two types of Soldiers: archers and shieldmen. The former attack from distance with their bows, while the latter engage in close combat. Highest-ranking officers bear wolf pelts and twin axes, fighting in melee, but are always characters and only appear in scripted events.

In some events, the Soldiers will fight on player's behalf. While their damage is mostly negligible, Soldiers can keep the enemy distracted for some time, allowing the Nephalem to attack from safety. One should not expect them to kill many enemies on their own. Some Soldiers are found in the Survivor's Enclave as well.

The only time Westmarch Soldiers, titled Traitors, will actually fight against the Nephalem, is The True Son of the Wolf event in Clyfton Hall. Led by Lord Wynton, rebel soldiers will protect him as he tries to usurp power amidst the Reaper invasion. They are no different from their loyal brethren, except for they deal considerable damage to the player. 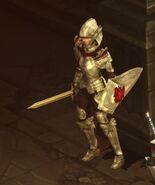 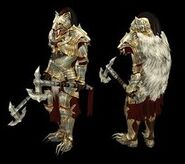 Rakkisguard Officer
Add a photo to this gallery
Retrieved from "https://diablo.fandom.com/wiki/Westmarch_Soldier?oldid=166615"
Community content is available under CC-BY-SA unless otherwise noted.