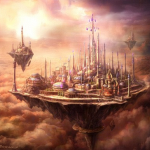 Anu is said to have been the very first being to exist, the closest equivalent to the concept of a Supreme Being (or "God") in lore, predating even the birth of the current Diablo Universe.

Nothing, save a single, perfect pearl.

Within that pearl dreamed a mighty, unfathomable spirtit-the One– Anu. Made of shining diamond. Anu was the sum of all things: good and evil, light and dark, physical and mystical, joy and sadness-all reflected across the crystalline facets of its form. And, within its eternal dream-state, Anu considered itself-all of its myriad facets. Seeking a state of total purity and perfection, Anu cast all evil from itself. All dissonance was gone. But what of the cast-off aspect of its being? The dark parts, the sharp, searing aspects of hate and pridefulness? Those could not remain in a state of separation, for all things are drawn to all things. All parts are drawn to the whole. Those discordant parts assembled into the Beast-the Dragon. Tathamet was his name-and he breathed unending death and darkness from his seven devouring heads. The Dragon was solely composed of Anu's cast-off aspects. The end sum of the whole became a singular Evil- the Prime Evil, from which all the vileness would eventually spread throughout existence.

Though separate beings, Anu and the Dragon were bound together within the Pearl's shadowed womb. There they warred against each other in an unending clash of light and shadow for ages uncounted.

The diamond warrior and the seven-headed dragon proved to be the equal of the other, neither ever gaining the upper hand in their fierce and unending combat-till at last, their energies nearly spent after countless millennia of battle, the two combatants delivered their final blows. The energies unleashed by their impossible fury ignited an explosion of light and matter so vast and terrible that it birthed the very universe all around us.

All of it continues through the night and the day in the ebbing and flowing of the ocean tides and in the destruction of fire and the creation of the seed.

In the epicenter of reality lies Pandemonium, the scar of the universe's violent birth. At its chaotic center lay the Heart of Creation, a massive jewel unlike any other: the Eye of Anu- the Worldstone. It is the foundation stone of all places and times, a nexus of realities and vast, untold possibility.

Anu and Tathamet are no more, yet their distinct essences permeated the nascent universe-and eventually became the bedrock of what we know to be the High Heavens and the Burning Hells.

Anu's shining spine spun out into the primordial darkness, where it slowed and cooled. Over countless ages it formed into the Crystal Arch, around which the High Heavens took shape and form.

Though Anu was gone, some resonance of it remained in the holy Arch. Spirits bled forth from it-shining angels of light and sound who embodied the virtuous aspects of what the One had been.

Yet, despite the grace and beauty of this shining realm, it lacked the perfection of Anu's spirit. Anu had passed into a benevolent place beyond this broken universe- a paradise of which nothing is known and yet represents perhaps the greatest-kept secret of Creation.

Longed for, but unimaginable.

Just as Heaven cooled in the spaces above, Tathamet's blackened, smoldering husk spiraled into the lower darkness of reality. From his putrid flesh grew the realms of the Burning Hells. The Dragon's seven severed heads arose as the seven Evils- the three strongest of which would be known as the Prime Evils. They, along with their four Lesser brethren, would rule over the ravening, demonic hordes that spawned like maggots from the desiccated cavities of the Burning Hells.

Retrieved from "https://diablo.fandom.com/wiki/User:Ralnon?oldid=79172"
Community content is available under CC-BY-SA unless otherwise noted.