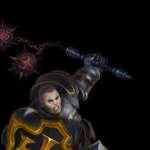 Hello, Demon Hunters, and.... all things very Demon Hunter-y. I'm Ishi Clarke, and I can already tell I might be a good ally in this Pandemonium Fortess-like interpretation of a Wiki.

A spare weapon, some gold, a small gem, is all I ask in exchange for advise you might need on, oh... whatever quests you might undertake.

All pieces of advise handed out by me come with a 2-day warrantee, courtesy of Gheed and Charsi at the Rogue Encampment.

Ok, so, you wanna know what I prefer to do in Diablo, hmm? Well, to tell the honest truth, I specialize in smash your face in, melee style heroes. So think of me as something like an expert on the Barbarian, the Warrior, and the like.

My personal favorite builds to run with in Diablo II consist of the Double Swing (NOT Frenzarian, that's unfitting for me) Barbarian, the Concentrarian (who also does not spec in Whirlwind, again, not fitting for me :P Notice a trend yet?), the Zealot Paladin, and the WereDruid.

As for Diablo III... well... 'tis a matter of FUS RO DAH and a Barbarian's Bash, combined in one. Proud to say Bash-Onslaught for life on the Barbarian, no matter the patch notes! I came to watch my Barbarian smash every Demon to DEATH, and Whirlwinding through them isn't too satisfying for me, compared to watching them fly across the planet after a Bash to the face.

Want to see his crazy idea of a build? Look no further than here!

Favorite Quotes from the Diablo FranchiseEdit

"How tastes your fear?!"

"The crusade marches on!"

"Eternal suffering would be too brief for you, Diablo"

"What a pity. I was beginning to enjoy the darkness..."

Retrieved from "https://diablo.fandom.com/wiki/User:Ishi_Clarke?oldid=122402"
Community content is available under CC-BY-SA unless otherwise noted.