"The unburied are formed from human corpses that were flung together into mass graves without a proper burial. This hideous amalgamation of bodies decomposes together into one being, bound by some foul magic. For all my knowledge, I could only flee from it...and I would expect any other sensible person to do the same."
— Abd al-Hazir

Unburied (a.k.a. Disentombed) are Undead made up of bodies, soil, rocks and discontent souls. These brutal monsters make an appearance in Act I of Diablo III.

These behemoths are essentially horrendous amalgamations of human bodies which were disposed of unceremoniously. The rotting bodies join together hideously to form a large hulking creature which crawls out of its grave and is said to "feed on human suffering."

Their sickly gray skins are spotted with even sicklier human heads, or what had been human heads when they were alive, complete with fangs. Their hands, devoid of fingers, arms and their backside are laden with brutal spikes. These spikes are shards of stone ripped from the earth during the development of the creature. They stand on very disproportionally short legs, which gives them a heavy stomping gait. Their spines also feature short but wicked spikes.

Something is dreadfully wrong. Fear is in the air; I can feel it. I was but days out of Tristram when I saw a screaming ball of flame rip across the sky. Surely enough, soon after witnessing this harbinger of doom, I stumbled upon a badly mangled traveler. He was barely able to spit out the tale of the cursed monstrosity responsible for his broken body as his life drifted away. He called his killer "the unburied".

Months ago, when I wrote of the undead blight upon our land, I thought them the gravest of threats. But they are nothing compared to the new undead creature described to me by this poor fellow.

He was a law officer of sorts, a local guard out looking into the depraved handiwork of a crazed individual, the sort we seem to be seeing more and more of in these dark days. When the guard happened upon a mass grave dug by this sick fool, a massive, horned, disgusting behemoth was digging itself out. The dying traveler described this loathsome beast – or, as he termed it, the unburied – as being comprised of bloated parts from many fetid, rotting corpses, with a multitude of disfigured heads and slobbering fanged mouths. He was fortunate that day, but when he returned with several men to help him deal with the creature, they found to their horror that the undead spawn was too much for even their combined efforts. They fought valiantly to the last man, sacrificing themselves to keep the beast from rampaging across the countryside and taking who knows how many innocent lives. He was the last survivor, and before he passed on, he proudly told me that they were successful in eradicating the foul unburied creature.

Being born out of pits of human misery, these beings feed on human suffering. Wherever bodies are dumped together unceremoniously, the unburied may rise. I cannot help but wonder if this be some sort of cosmic justice for our inhumanity to our fellow man. But what is the catalyst? What animates these things? What makes them so horrendously different from the run-of-the-mill zombies or "normal" skeletal undead?

Some days I truly feel that the end of humanity must be at hand. Certainly our world is home to assorted disturbing and unsettling creatures, but every dawn seems to bring news of more wretchedness we must endure as a people. The darkness is coming, my friends: mark my words. - Abd al-Hazir

Unburied are encountered fairly early in the game, and can be considered one of the toughest opponents of this part of the game. They can take a beating and hit like trucks. It is not uncommon to encounter multiple Unburied at the same time. In return, they move and attack very slowly. Despite their sheer size, they are not immune to Knockback.

The first encounter with the Unburied occurs in Chancellor Eamon's tomb, and it is tagged as 'the Horror of the Crypt'.

Unburied hit hard and can take a lot of damage, so use snare or disorienting abilities to keep them from attacking. If there are multiple Unburied, try and lure them away or separate them.

Watch out for their knockback attack as it might force you into a corner or in the middle of another pack of foes. 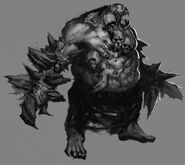 Add a photo to this gallery
Retrieved from "https://diablo.fandom.com/wiki/Unburied?oldid=184153"
Community content is available under CC-BY-SA unless otherwise noted.