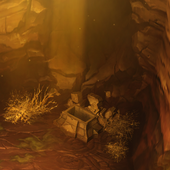 The Tunnels of the Rockworm appear after killing Graveljaw the Devourer in the  Deserted Cellar. The area is a single floor while using the tileset that is mostly the same as an underground desert cave, which contains breakables and lootables such as Dead Worms, Egg Sacks, Stone Piles, corpses, normal chests, and a possible Resplendent Chest .