Start a Wiki
watch 02:01
Who are Treasure Goblins?
Do you like this video?

"Some devious little goblins have been robbing our merchants! When pursued, they simply open portals and disappear with a most aggravating chuckle. The peasantry seem to believe that the goblins serve a great demon lord known as Greed and furthermore, that their portals lead to Greed's domain! A ludicrous notion, truly."

Treasure Goblins are small demons that steal loot and everything that glitters, carrying said treasure in sacks over their shoulders. They are servants to the baroness Greed, and they enter her domain from the mortal realm through portals.

The Goblins do not fight, preferring to escape into their realm where no one can follow them (or at least so they think), and even if anyone manages to, the Sentries will protect the Goblin there.

"Old stories refer to these creatures as the Drunkard's Faerie because people dumbfounded with drink often see a small creature carrying a bag of gold out of the corner of their eye. Many historians believe they are a race of goblins that are native to our world, but that is not the case. They are demons."

Treasure Goblins are ragged opportunists, sneering and scuttling amidst battles to collect the loot of the fallen. Mischievous scavengers, they have a hunched posture due to the weight of the treasures they carry over their backs, and possess grayish bodies and lizard-like heads. As quickly as they enter Sanctuary, they depart, disappearing into portals with their goods in tow.[1] Old stories refer to these creatures as the "Drunkard's Faerie," as intoxicated individuals often see a small creature carrying a bag of gold out of the corner of their eye.[2] A guarded species, if observed during one of their hunts, Treasure Goblins will retreat through these portals, utilizing a type of magic not unlike that of the kind the Horadrim employed to summon Town Portals and Waypoints.[1] This was done at the will of Greed, a demon that Treasure Goblins serve. She aimed to lure greedy adventurers into her realm to their doom in a sea of riches they would never spend.[2]

Treasure Goblins are a more recent addition to Sanctuary's bestiary.[1] They gained a place in human folklore, and some scholars theorized they were an indigenous species of goblins. Before the Darkening of Tristram, Adria discovered the true nature of the Goblins, and how they served Greed, but apparently never shared her findings beyond the Coven.[2] Thus, to best knowledge, no mortal had ever followed a Treasure Goblin through its portal.[1]

"Treasure goblins are highly trained professionals, specializing in the transportation of valuable goods throughout the dangerous lands of Sanctuary. They are particularly skilled at engaging evasive maneuvers when avoiding the hostilities of local Nephalem. Though the reward may be great, one must be cautious in approaching the timid and excitable Treasure Goblin, lest you find yourself guided through a gauntlet of dangerous elite packs."

Treasure Goblins cannot attack the player, and remain idle until attacked. Upon taking hit, they stagger for a moment (suffering reduced damage for a few seconds, so it is impossible to kill them before they start running) and then flee with great speed away from the player, running towards other monsters if possible. As they take damage, they will drop gold, leaving a trail of coins to be traced easily. Killing them will spill their entire loot onto the floor, which typically includes potions, extra gold, gems, crafting materials, as well as magical and sometimes rare armor and weapons, with a chance for a legendary.

From time to time, Goblins stop and start opening the portal. If not struck in 6 seconds, they escape, leaving no loot and awarding no credit for the kill. This can be interrupted (to set them fleeing again), Since patch 2.1.1 goblins Flee with a speed boost for about 2 seconds and with increased speed after the portal is interrupted the goblin gets faster the more times you interrupt the portal. Slowdown, Stun, and other similar crowd control tools have no effect on Treasure Goblins at all, but Freeze and some Knockback effects can be useful. Otherwise, only direct damage will suffice. Followers and pets do not attack idle Goblins until those are within 10 yards.

There is a very small chance to encounter a Goblinfest in Nephalem Rifts. The Fest consists of 10-30 Treasure Goblins in one location, resting together. It may be a very good opportunity to obtain a huge portion of loot, provided player manages to kill them all in time.

Goblins cannot harm the player in any way. However, they will try to run into other enemies, who will make it significantly harder to chase the greedy mocking packrat.

Note that all Treasure Goblins, regardless of type, count as elites.

As of Patch 2.1, there is a very small chance that Treasure Goblin slain in Adventure Mode will leave an opened portal to the Treasure Realm, which the players can use. Treasure Goblins in Rifts and Campaign cannot open this portal. See main article for details. As of patch 2.6.5, there is also a chance for this portal to lead to somewhere udderly ridiculous.

As of Patch 2.1.1, Goblins appear with a small minimap icon and show a portal before they are engaged. This is not a bug, but a trait designed to let players detect them easily. In patch 2.1.2, the icon was replaced with an actual image of the goblin on the map, which is really hard to miss.

In Adventure Mode, special variants of Goblins can be encountered, distinguished by their color, that drop special rewards, amount increasing with difficulty.

The Treasure Goblin was a late addition to Diablo III's monster roster. When the sound team was presented with the creature's, there was some trepidation in the need to tackle "yet another bi-pedal monster." Its grin (as depicted in said artwork) was seen as a defining feature. In the recording studio, a series of of laughs, guttural giggles, and playful exclamations were made by Seph Lawrence. These became the basis for the creature's sound design, after which Michael Johnson raised the pitch.[4]

A World of Warcraft Treasure Goblin pet exists, awarded to players who also purchased the Collector's Edition of Reaper of Souls.

Treasure Goblins appeared in Heroes of the Storm for a limited time, where they could be killed for extra gold.[6]

In World of Warcraft: Legion, a new monster type is introduced, called the Treasure Demon appears, which functions identically to Treasure Goblins (giving a reward if players kill them before their casting of an escape portal is complete).

A treasure goblin can be spotted in the mission "Into the Void" in StarCraft II: Legacy of the Void.

Rainbow Goblin as in game (modeled after the plush toy)

Goblinfest in a Nephalem Rift 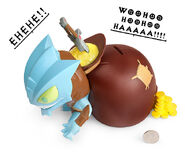 The Treasure Goblin coin bank
Add a photo to this gallery

Retrieved from "https://diablo.fandom.com/wiki/Treasure_Goblin?oldid=186771"
Community content is available under CC-BY-SA unless otherwise noted.