A Town Portal is a class independent skill which opens a portal to the character's spawn location. You can walk through the Town Portal by clicking on it. Doing so teleports you to the town that is related to your current Act. In the town there is also a town portal. Through that portal you can go back to the place where you cast the same Town Portal. The portals will then disappear once the player goes through them from the town, unless that portal was opened through a Portal shrine in Diablo II. However, if player manages to go around and approach the portal from the original side, they can use it to get to town again: the portal only closes when it is used to get from town elsewhere.

Town Portal is a spell in Diablo I.

This spell can be cast from a scroll or Staff, in addition to the actual spell (in that case, it does not even have Magic requirements). The Spell Level only lowers Mana cost to a certain limit.

Town Portals remain open indefinitely, until the character who cast it uses it to return to the dungeon from town. If two or more players cast town portals, they can keep them open forever by only returning via the portal cast by the other player. Each character can have only one active Town Portal, and if a second is cast, the first will vanish (but in town, multiple portals from multiple players can exist).

An open Town Portal also increase the light radius in the dungeon.

In Hellfire, there are also portal Shrines.

The Horadrim constructed numerous magical gateways between the mighty fortresses so that they could quickly concentrate their defenses against any incursion by the Demons. With but a thought, the Crusaders of the Light could transport themselves to predetermined destinations many leagues apart. Although the secret of creating these gateways has been long lost, it is still possible to use the pathways that are already in place. A Portal opened by means of this spell will always take the caster to the location of the nearest gate and remain open long enough to bring the caster back to his point of origin. The Church of Tristram is built upon the remains of a Horadrim monastery, and it is quite probable that a gateway lies nearby.

In Diablo II, Town Portals still work in (roughly) the same way. However, this time, they are not created by a separate spell. Instead, Scroll of Town Portal items can be bought and stored into Tome of Town Portal books. One Tome can hold up to 20 scrolls. This is an easy way to store Town Portals without losing too much inventory space.

When going through large areas between Waypoints, It is a good idea to open up a Town Portal as a quick escape route. You can use it to retreat from danger or to get back to your body much more quickly if you die. Diablo can easily kill a player relying on this tactic, though, as he has the ability to encase the opened portal in bones, preventing it from being used.

Also, in the wilderness, players may encounter Portal Shrines. These shrines give players the "freedom to go home...", opening a Town Portal that lasts twice as long as regular Town Portals. The players can use these shrine portals as many times as they want. If the player casts another Town Portal from a scroll, a second, normal blue portal will be created. But, if the player activates another Portal Shrine, the original shrine portal will be replaced by the new one.

You cannot enter Town Portals cast by other players in areas beyond the "blocking quests" without having completed those quests, for example:

NOTE: A player who kills the High Council (but doesn't use Khalim's Will to smash the Compelling Orb) may take a Town Portal into the Durance of Hate.

This is to prevent higher level players from helping lower level players to advance further in the game without working for it. If a player is unable to enter a portal, this means they need to complete a quest.

In Diablo III, Town Portal has once again been altered. It now occupies a permanent place in the user interface and can, rather than using up mana or scrolls, be triggered at any time once it has been acquired. Unlike its previous appearances, Town Portal now takes several seconds to cast properly (a blue progress bar will appear above the player's head during casting). A successful attack from a monster will interrupt casting and force the player to remain in the area until they try again. Using a pair of Homing Pads will allow the Nephalem to continue channeling the portal, even through taking damage, but status ailments like Frozen, Knockback and Stun can still interrupt the Town Portal. Rather than creating a portal and allowing players to enter it, the spell will teleport the player to town, opening a portal that can be used to get back.

Town Portal may not be used in instanced boss fights. Once players enter the boss zone, there is no turning back until one side dies in the ensuing battle.

Town Portal is acquired by all characters after retrieving King Leoric's crown on Normal Difficulty. Although it does not have to be re-acquired on higher difficulties, it must be acquired separately for all characters. The default key for activating it is T. 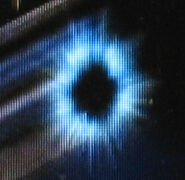 Town Portal from Diablo 3 in beta 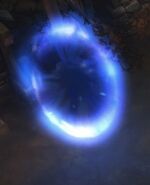