Tools of the Trade (Quest)

""When I fled the Monastery, I left behind the Horadric Malus, my enchanted smithing hammer." -Charsi

Tools of the Trade is the fifth quest of Act I in Diablo II. This quest becomes available by speaking to Charsi following The Forgotten Tower quest, or after entering the Tamoe Highlands, however, it can only be retrieved from its stand by a character that is at least level 8 and has not yet completed the quest. The Horadric Malus also cannot be picked up until after Deckard Cain has been rescued from Tristram. Charsi requests your aid in retrieving the Horadric Malus, an enchanted smithing hammer that could be used to aid the Sisters in their battle against Evil. Charsi indicates that she was forced to abandon it while fleeing the Rogue Monastery during the invasion by Andariel.

Upon returning the Horadric Malus to Charsi, she will imbue a piece of normal equipment, turning it into a rare item with randomly selected abilities. No Magic, Rare, Set, or Unique items can be used. This can only be done once per difficulty; therefore, it is recommended that Charsi's imbue be saved until later in the game for a higher level item. Circlets are the popular choice.

Completion of this quest prompts Cain to initiate the Sisters to the Slaughter quest.

"When I fled the Monastery, I left behind the Horadric Malus, my enchanted smithing hammer. If you can retrieve it for me, I'll use its magic to strengthen your equipment."

"The retrieval of the Horadric Malus is not without risk. Our Monastery is filled with voracious hellspawn. You'd best be careful, my friend"

"The Malus was forged and enchanted by the ancient Horadric Mages during the Sin Wars. When their union dissolved, the Malus was entrusted to the Sisterhood guarding the pass into the East."

"The Monastery can confuse even those who know it well. Stay alert in there."

"Charsi talks of nothing anymore, but this Horadric Malus. Between you and her my ears need a rest. Just find it and bring it back quickly."

"I have offered my nomadic phallus, but to no avail."

"Charsi is wasting her time and talents using an inferior hammer! Had she the Horadric Malus, she could make the steel sing and craft you a suit of armor as impenetrable as the Great Eye."

"Just as an archer needs bow and arrow, or a draughtsman pen and paper, so Charsi needs the Horadric Malus with which to ply her trade."

"If you can't carry out this quest, how will you face the greater evils ahead?"

"The Malus has eluded you so far. Well, search thoroughly in the Barracks...That is where the Rogues kept their forge."

"The Malus is a Horadric artifact of great power. Please bring it back."

"I have heard that you bear us no Malus. (laughs)"

"To do battle with Andariel requires more than thick skin and a strong will. You'll want armor and weaponry forged with the hammer's enchantments."

"What better opportunity to show your mettle?"

"Well done, my friend. But remember, the return of the Horadric Malus is but one step in reclaiming the Monastery."

"The magical effects imbued by the Malus are impossible to predict, but are always to the good."

"Oh! Thanks so much for returning the Horadric Malus! I will now imbue one of your items with magical powers."

"I guess it's too late to take back some of the names I called you."

"Now that the Horadric Malus is back in our possession, we shall use it to deliver a great blow against the Evil which torments this land."

"I am glad the hammer has returned and you with it."

"The Sisters will be glad to have this back."

"A malus! This should go to Charsi."

"I should take this to Charsi."

"Charsi will be thankful to get this malus."

"All this for a hammer?"

"This will help the Sisters turn the tide against Evil."

"I hope the Sisters appreciate this thing." 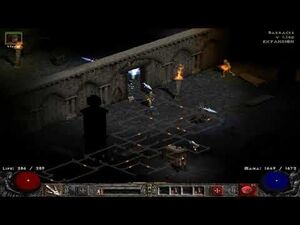