The Mimic is a non-combat pet in Diablo III, added in patch 2.4.1. It drops from Menagerist Treasure Goblins.

A tiny chest. Why is it quivering?

Just a harmless chest. Nothing bad could happen if you approach… 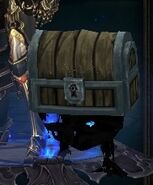 Retrieved from "https://diablo.fandom.com/wiki/The_Mimic?oldid=188479"
Community content is available under CC-BY-SA unless otherwise noted.