"...And so it came to pass that the Countess, who once bathed in the rejuvenating blood of a hundred virgins, was buried alive..." -The Moldy Tome

The Forgotten Tower is the fourth quest in Act I: The Sightless Eye of Diablo II.

Unlike the other quests in Act I, it is activated by reading a book rather than by talking to an NPC. The book, known as the Moldy Tome, can be found on a stone pedestal within what appears to be a ruined chapel in Stony Field. The book relays the story of a ruined castle in the wilderness that was once inhabited by a wealthy, yet evil Countess.

The Tower is located in the Black Marsh, beyond the Dark Wood. There are five descending floors within the Tower Cellar, with the fifth floor leading to the Countess herself. Upon her defeat, a sealed chest will open, and spew out the treasure that is the reward for this quest. In addition to a substantial amount of gold, the Countess might also drop one or more runes (provided the expansion has been installed).

The forgotten tower can be revisited any time, and it is a good place to level-up hirelings if being played in Lord of Destruction. Note that the treasure chest only opens when the player is on the quest.

The first four floors should be treated like any other dungeon. The Countess herself is a tough, fire-oriented melee boss with several corrupted rogue minions. She stays in her room and casts fire walls on the only two entrances of the room she is in. Her minions can however be easily pulled out of the room to be dealt with individually. After taking care of her entourage the countess can be taken down quite easily.

"...And so it came to pass that the Countess, who once bathed in the rejuvenating blood of a hundred virgins, was buried alive...And her castle in which so many cruel deeds took place fell rapidly into ruin. Rising over the buried dungeons in that god-forsaken wilderness, a solitary tower, like some monument to Evil, is all that remains.

The Countess' fortune was believed to be divided among the clergy, although some say that more remains unfound, still buried alongside the rotting skulls that bear mute witness to the inhumanity of the human creature."

"The dangers there are not solely architectural. Once inside that wretched place, many succumb to a vile miasma."

"That tower marks a place of danger. There is an epic poem about it... How much sorrow one can stand was tested there."

"That old tower is as rotten on the inside as it appears on the outside. I heard that several Sisters came to a gruesome end when a stairwell collapsed on them."

"The only wealth you're likely to find there is a wealth of vermin."

"The tome speaks of treasure. Yet, all we have found are death, delirium, and disappointment."

"Rumors of treasure are no different from rumors of any other kind. They hold false promise to those who should know better."

"There is no more I can tell you about that ancient tower."

"Quickly in and quickly out is all the advice I can give you."

"Guess what! I've named a boil on my ass after you. It, too, bothers me every time I sit down."

"Have you suddenly lost your taste for wealth?"

"Better an empty pocket than a full grave."

"I thought the stories of treasure in the tower were nothing but lies. I am glad you found something of value in that death-trap. Would that our Sisters had been so fortunate."

"Well done, my friend. Courage and opportunity together have created in you a kind of alchemy."

"Those riches will serve you well on the long road ahead."

"Warriv's advice is like corpse gas; it befouls the air for a moment and then it disappears."

"Your rewards are well-earned. To us, the tower was nothing more than a headstone looming over a long forgotten grave."

"Remember, wealth is as insubstantial as a cloud and passes as quickly. Ignore Gheed. All that twitters is not bold."

"Ugh, who would want to remember this place?"

"The stench of poison."

"Mm, I can smell why this tower is abandoned."

"This place reeks of death."

"This tower shall be cleansed of evil."

"This place holds many secrets."

"Ah, the tower's trove, for the taking!"

"So much treasure, it almost covers the stench."

"Haha, this is reward enough."

"This tower has its charms."

"I've earned the right to this abandoned trove."

"I hope to find other such treasures." 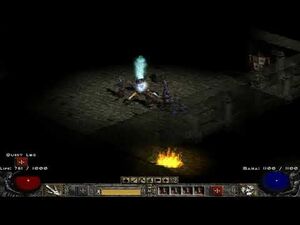