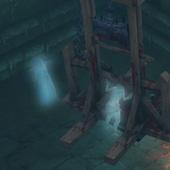 The Cursed Hold is a location in Act I of Diablo III. The players has to enter this hold and defeat the enemies inside in order to save The Stranger from Maghda.

In the Cursed Hold, the players encounter the ghost of Queen Asylla, one of the many poor souls claimed when King Leoric went mad. She charges the player with freeing the souls of her servants, who are cursed to languish away in their cells throughout the Hold, even death offering no respite from their torment.

As the player frees each subject, he or she comes to the attention of The Warden, King Leoric's head jailer, who runs this place of misery even after death, who sends his undead minions to stop him or her. Once the last subject is freed, Asylla will entreat the player to travel to the center of the hold and destroy the Warden.

Once the Warden is defeated, the player is free to travel further into the Halls of Agony. In the chamber near to the exit to this map, the player can watch a ghostly reenactment of Queen Asylla's execution by King Leoric and Archbishop Lazarus and read a message from Lazarus that lays bare his evil intentions.