View source
"What a MOOvelous occasion!"

Diablo II
Diablo III
The Cow King is a Hell Bovine monarch that is associated with The Secret Cow Level.

In Diablo II, the Cow King is the Super Unique boss of The Secret Cow Level. It looks just like any other Hell Bovine: there aren't any visual clues to identify it, except highlighting. However, the Cow King always spawns inside the fenced enclosure located in the secret cow level, so players who wish to avoid killing him can just avoid the enclosure altogether.

The Cow King, as well as other Hell Bovines, has a chance to drop "Cow King's Leathers".

Once he is killed, the portal to the Secret Cow Level cannot be opened again in the same difficulty. So, that makes the Cow King's Leathers the hardest set to complete in one game because there are 3 set pieces and the player gets only 3 chances to kill the King - one in each Difficulty. This results in a popular tactic among those that wish to run the level to avoid slaying him at all costs. Deliberately killing The Cow King while in a party is often considered a major offense.

Besides these two attributes that always appear (as well as lightning immunity), the Cow King gains one additional attribute (random modifier) on Nightmare and two on Hell. One of the most annoying attribute that it can get is Aura Enchanted: a Conviction aura Cow King coupled with its natural lightning enchanted can make fighting the Cow King a very hazardous task. It can also hold a range of immunities which can be quite annoying for pure-elemental Sorceresses and other element-dependent characters. On the other hand, guaranteed lightning immunity prevents accidental kills, making lightning-based characters safe for farming Cow Level.

The Cow King is known more for his infamy among the rumor mills than for his drops. Ever since his discovery as an easter egg, he has been associated with various other fake hidden eggs. He was supposed to:

An NPC called "Ghost of the Cow King" appears in the Old Tristram Road in Diablo III, next to the portal to the Pony Level (the game's Cow Level). The ghost refers to the "fact" that there is "no cow level" after the player character breaks the fourth wall by referring to said level about cows.

In a limited time anniversary level, the ghost of the Cow King introduces the "Tipping Point" event and the unique boss, The Cow Queen can be encountered.

Nephalem Rifts has a very small chance to have a Rift Guardian named Lord of Bells, who takes the form of a huge cow with a two-handed axe, clearly a reference to Cow King. In addition, players may find (and use) his weapons: Bovine Bardiche and Man Prodder.

Non-combat pets named That Which Must Not be Named and Royal Calf can be found in game.

The Cow King can appear in the Diablo-themed tavern brawl in Hearthstone: Heroes of Warcraft. If the player uncovers all three secrets of Aidan, he will transform into the Cow King.

The Cow King in Diablo II has an unused blue color palette due to his lack of palshift.dat file. 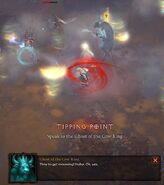 Cow King's ghost in Not The Cow Level

The cow king's ghost in the Bovine Rift