This first quest in Diablo involves killing a blood-crazed Overlord known as the Butcher. It is initiated by speaking to a Wounded Townsman at the entrance to the Cathedral. The townsman will inform the hero about the Butcher's attack on the search party that was led by Archbishop Lazarus. The Butcher himself resides in a small, corpse-filled room within the second level of the dungeon. As soon as his door is opened, the Butcher will utter his famous line, "Ah, fresh meat!" and attack, wielding his namesake weapon: the Butcher's Cleaver. Upon his defeat, the quest is complete and the hero is free to claim the Butcher's Cleaver, a Unique Cleaver, as his or her prize.

This is one of the four main quests in Diablo that appear in the game's Multiplayer mode. It is presented in the same manner as in Single Player, but the Butcher will drop a random magic item instead of the cleaver upon dying.

Once you find the wounded townsman by the Cathedral, he utters the following story:

"Please, listen to me. The Archbishop Lazarus, he led us down here to find the lost prince. The bastard led us into a trap! Now everyone is dead...Killed by a Demon he called the Butcher. Avenge us! Find this Butcher and slay him so that our souls may finally rest..."

He then dies. If the player clicks on the body, which remains until quest completion, the character will state "Your death will be avenged!"

"It seems that the Archbishop Lazarus goaded many of the townsmen into venturing into the Labyrinth to find the King's missing son. He played upon their fears and whipped them into a frenzied mob. None of them were prepared for what lay within the Cold Earth...Lazarus abandoned them down there - left in the clutches of unspeakable horrors - to die."

"I know more than you'd think about that grisly fiend. His little friends got a hold of me and managed to get my leg before Griswold pulled me out of that hole.

I'll put it bluntly - kill him before he kills you and adds your corpse to his collection."

"By the Light, I know of this vile Demon. There were many that bore the scars of his wrath upon their bodies when the few survivors of the charge led by Lazarus crawled from the Cathedral. I don't know what he used to slice open his victims, but it could not have been of this world. It left wounds festering with disease and even I found them almost impossible to treat. Beware if you plan to battle this fiend..."

"When Farnham said something about a Butcher killing people, I immediately discounted it. But since you brought it up, maybe it is true."

"Yes, Farnham has mumbled something about a hulking brute who wielded a fierce weapon. I believe he called him a Butcher."

"I saw what Farnham calls the Butcher as it swathed a path through the bodies of my friends. He swung a cleaver as large as an axe, hewing limbs and cutting down brave men where they stood. I was separated from the fray by a host of small screeching demons and somehow found the stairway leading out. I never saw that hideous beast again, but his blood-stained visage haunts me to this day."

"Big! Big cleaver killing all my friends. Couldn't stop him, had to run away, couldn't save them. Trapped in a room with so many bodies...so many friends...noooooooooo!"

"The Butcher is a sadistic creature that delights in the torture and pain of others. You have seen his handiwork in the Drunkard Farnham. His destruction will do much to ensure the safety of this village."

"The spirits of the dead are now avenged!"

This quest reappears in The Darkening of Tristram in Diablo III, with a difference that Wounded Man is long dead (only his bones remain), and instead drops a random Normal item.

The Butcher is still found in his locked room at Level 2, and drops The Butcher's Cleaver as a Magic item upon death. 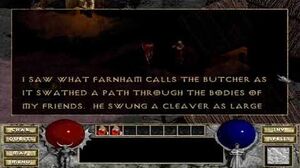