watch 02:45
Wiki Targeted (Games)
Do you like this video?
Play Sound

For the gameplay mechanic, see Armory. 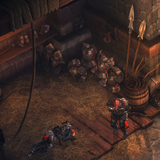 The main occupants of this zone are Adria and Leah, who is tasked with holding the Black Soulstone together throughout the act. All parts to Leah's Keep Journal can be found here throughout the act, in a barrack that has been converted into Leah's room.

After the death of Ghom in the Bastion's Keep Larder, Leah temporarily loses control over the Black Soulstone, resulting in a surge of evil that overwhelms the Bastion's Keep guardsmen stationed in the Armory, unleashing a swarm of Terror Spawn that the Nephalem has to kill to keep her and Adria safe.

When Azmodan is defeated, the player travels through the Armory one last time, and finds the bloody remains of more Bastion's Keep guardsmen strewn across the Armory floor, tipping the player off that something is very wrong just before the final scene of Act III, where Adria's full betrayal takes place.

While Bastion's Keep Stronghold still serves as the main town in Act IV, the player cannot access the Armory again during that act.