Yup you're right. The manual says: 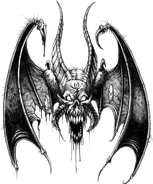 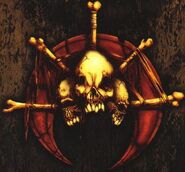 Mephisto, the Lord of Hatred (Odium)
Add a photo to this gallery

Yeah, but we still don't know if the info in the D1 manual is correct or not. It would be cool for cultist to have different headdresses depending on who they worship. - DanTalk 07:45, 26 September 2008 (UTC)
Look at this: http://www.mobygames.com/game/diablo-ii-lord-of-destruction/cover-art. Do you see any mention of Baal? Anything to say it's Baal's insignia? The D2 and LoD manual don't say anything about insignias.- DanTalk 07:50, 26 September 2008 (UTC)

Wasn't the Sin War released after LoD??? Then, look at the emblems of the Triune. Mephisto has a red circle, like in his insignia, Baal has the leaf, like the shape of his insignia, now I don't remember Diablo's but his is bound to be related to the insignia too. Now, if they're related, then the insignias are also theirs, right?? "Fear me!!!" (f")f <-- MOBOKILL (Ramblings) 07:51, 26 September 2008 (UTC)

Oh, yeah, Dialon-ram, Bala-leaf, Mepfis-red circle they kinda look like the Evils' insignias. It seems it all falls into place quite nicely. - DanTalk 08:01, 26 September 2008 (UTC)

Odium, Excidium and Metus are just latin words for Hatred, Destruction and Terror. And yeah, they do sound really cool. I wish they had have done the same for DII. Its little latin touches like this that I love.Atrumentis 01:03, 4 October 2008 (UTC)

I was halfway through act three with my necromancer when i started thinking about this, Tyrael personally involved himself not only with Baal imprisonment, but also when he escaped, as well as the expansion's storyline. He seemed more concerned with Baal's continued captivity than the reemergence of the Lord of Terror, they both got tendrils and use them in combat. Could it be that these two are each other's Heavenly/Hellish double? 80.212.252.65 07:53, February 11, 2011 (UTC)

"Baal displays some qualities that sets him apart from his two brothers. When he met Marius, though he could have killed him immediately and taken the Soulstone, he instead chose to listen to his tale. It's ambiguous as to why he did this."

I'm pretty sure it was direction. They wanted to tell a story, rather than have "action" cutscenes. Builds better drama that way.

Obviously it was for directive purposes. That's not the point though. Think of it from Baal's perspective. From inside of the game. Ignore for a moment the fact it actually is a game and consider the story of the game. The ambiguity will become clear. -- Kharay1977TC 03:43, November 13, 2010 (UTC)

Ok , this was the 1st time that I encountered this weird glitch when grinding Hell Baal : After I had cleared all monsters in Throne of Destruction ( which isnt an easy task ) , Baal kept cursing me with Decrepify and not summon the Act 1 wave of monsters .

Anyone know what cause this glitch and how to fix it in game ? FYI , I soloed with Necromancer and exploded a few corspes near Baal .

I think we can now put it on all 7 evils now, instead of Unknown?—The preceding unsigned comment was added by Pryamus (talk · contr).

Retrieved from "https://diablo.fandom.com/wiki/Talk:Baal?oldid=104495"
Community content is available under CC-BY-SA unless otherwise noted.