"Tala was my friend. She fought by my side in many battles. Those who give in to dark magics deserve their fate."

Tala, Unclean Reaver is a female unique Unclean One found in Ruins of Sescheron in Act III of Diablo III.

She may randomly spawn in the Ruins of Sescheron, and may be nominated a bounty target. It appears that she carries a Crusher.

Like other Barbarian cannibals, she has very high melee damage, huge Life pool and moves very quickly. In addition, she has Cleave and Furious Charge abilities, the latter dealing massive damage to any enemies caught in her path, enough to one-shot kill an adequately geared hero.

Her other unusual ability is her spawning manner: when out of combat, she hides high in the ceiling, falling upon victim from above. It is therefore not possible to ambush her and attack first. 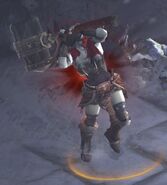 This section contains facts and trivia relevant to this article.
Retrieved from "https://diablo.fandom.com/wiki/Tala?oldid=138087"
Community content is available under CC-BY-SA unless otherwise noted.