"I've been researching this lengthy eclipse, and I believe it to be the work of Claw Vipers."

Tainted Sun is the third quest of Act II. It is triggered when a player enters the Lost City, upon which a sudden eclipse occurs, engulfing the land in darkness. After talking to Drognan in Lut Gholein, it becomes clear that this is the work of the Claw Viper clan, and the player is told to end this curse by traveling to the Claw Viper Temple.

The Claw Viper Temple is located in the small Valley of Snakes, which lies adjacent to the Lost City. The Temple itself is filled with Claw Vipers and Salamanders, as well as their undead minions. Players should look for the Tainted Sun Altar, which is hidden on the second level of the Temple. Players will encounter more monsters here, including the Super Unique boss known as Fangskin. After the monsters have been defeated, the Tainted Sun Altar must be shattered, finally restoring the sun to its former glory.

Players must also pick up the Amulet of the Viper if they hope to progress in the storyline, as without it, restoring the Horadric Staff is legitimately impossible. After the Altar has been destroyed and the sun restored, head back to Lut Gholein and speak to the townsfolk to complete the quest. 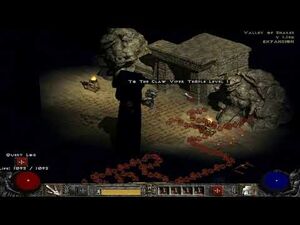