"Though this reaper wields a dangrous sword, its shield, with its rows of razor-sharp spikes, poses the greater threat. With a single thrust, it can open a man from waist to throat. That shield was not made for protection. It was made to cripple, maim and kill."

Carrying shields, they do not hesitate to use those for defense, blocking incoming attacks. They are also faster and tougher than average skeletons, and their melee blows cause Cold damage with each attack. Use of Damage Over Time attacks is advised.

Unlike those of Skeletal Shieldbearers, their shields do not break from attacks.

Compared to Revenant Shield Guards, they are more damage-oriented, but move slower than Summoned Soldiers. 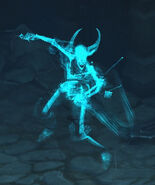 Add a photo to this gallery
Retrieved from "https://diablo.fandom.com/wiki/Summoned_Shield_Guard?oldid=166897"
Community content is available under CC-BY-SA unless otherwise noted.