"Any other archer would have fled as I charged, but this one stood its ground, staring down the arrow's shaft through lifeless, empty eye sockets. Even as I swung my blade to take off its head, the thing loosed another shot. How can we fight an enemy that has no fear, nor thought for its own self-preservation?"

Summoned Archers are a type of undead Reaper. They are fought in Act V of Diablo III.

Summoned Archers are identical to Skeleton Archers, except for their arrows fly slower, deal additional Cold damage and pierce through obstacles (including Waller barriers). In addition, Summoned Archers are classified as Reapers rather than Undead.

Death Maidens can summon Archers at their side, usually two at a time. 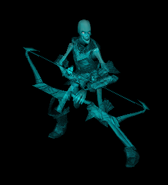 In-game model
Add a photo to this gallery
Retrieved from "https://diablo.fandom.com/wiki/Summoned_Archer?oldid=165783"
Community content is available under CC-BY-SA unless otherwise noted.