When activated, summons Zombie Dogs, which are autonomous minions following the Witch Doctor. Originally the spell summons three of them, and only three can be summoned at a time, but with certain passives, the limit (and amount summoned per cast) can be increased up to six. All means of summoning obey this limit.

Each Dog will have a limited amount of Life, but they do block enemy pathing, and deal rapid blows for Physical damage. They have roughly 100% of the Witch Doctor's total Toughness, and fully benefit from their Elemental Damage skill bonuses, elites damage and damage reduction, Thorns and many other stats, but not from Life per Hit, and their attacks have zero proc coefficient.

The cooldown of this skill prevents spamming the enemies with Dogs, but they last unlimited time.

Zombie Dogs (no matter if they were summoned through the Summon Zombie Dogs spell or not) may be sacrificed.

Originally, Zombie dogs could be enchanted with Elemental Damage by using other skills (such as Locust Swarm or Firebomb) on them. Bashiok revealed in later posts that this effect has been removed, but was then replaced with similar runes. 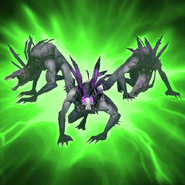 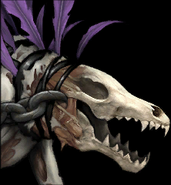