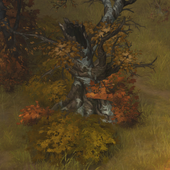 The Cave of the Moon Clan dungeon can be found here, along with the Abandoned Servant House, The Lyceum and the Watch Tower (which was previously located in the Northern Highlands in an older patch). A small Khazra camp will always be located in the northern area, below the gate. It has a 100% chance of spawning, and will usually have an event in it.

A Summoner's Journal can also be found here on the eastern side upon the sacrifice of a Summoner to create monsters to ambush on you.

This area has good chances of spawning Treasure Goblins (around the area and in the Cave of the Moon Clan, both levels), and is often used to hunt them purposefully.