"Powerful artifacts, intended to house the spirits of the Prime Evils. Apparently, they too were shards of the Worldstone. But only Zoltun Kulle knew of their construction."

The Soulstones (also written as "Soul Stones")[1] were a trio of gems originally created to contain the essence of the Prime Evils. While they were successful in this regard, they were eventually corrupted by the same entities they had once imprisoned, making the Evils even stronger. They are considered separate from the Black Soulstone.

The soulstones were created by the archangel Tyrael in order to contain the spirits of the three Prime Evils when they were exiled into Sanctuary. Three soulstones were fashioned, each of them a shard of the Worldstone. Their colors were sapphire, amber, and crimson; they would be used to bind Mephisto, Baal, and Diablo respectively. The task of using these stones to bind the Prime Evils was entrusted to the Horadrim, and of their number, it was Zoltun Kulle who bore them (who would eventually go on to create a darker yet similar weapon of his own). Because the soulstones were inexplicably attuned to the demons' essence, the Horadrim were able to track each evil down.

Mephisto was the first evil to be captured, and his soulstone was entrusted to the Zakarum, who buried his soulstone under the Temple of Light. Baal was second, though his intended soulstone was shattered in the effort to capture him.[2] This left the Horadrim in a precarious position, as there was not enough time to reformulate the soulstone.[3] The Horadric mage Tal Rasha however, volunteered himself as a surrogate soulstone. Plunging the largest shard into his chest, he was entombed beneath the sands of Aranoch, fated to wrestle with Baal's spirit for eternity. Finally, in Khanduras, Diablo was defeated and imprisoned, his soulstone hidden in a cave network above which a cathedral was erected.[2]

"Tyrael was a fool to have trusted me! You see, it was I who told Diablo and his brothers about the Soulstones and how to corrupt them. It was I who helped the Prime Evils mastermind their exile to your world. The plan we set in motion so long ago cannot be stopped by any mortal agency. Hell itself is poised to spill forth into your world like a tidal wave of blood and nightmares. You and all your kind...are doomed."

What even the High Heavens did not know was that the soulstones were the centerpiece of a diabolical plan by the Prime Evils in order to make way for the invasion of Sanctuary. The Prime Evils were told by Izual that they could use the power of the Soulstones to tap into the power of the Worldstone while they were in Sanctuary. According to their plan, they orchestrated their own exile into Sanctuary and used their powers to corrupt the very soulstones that held their essence.[4][2]

The first one to take control of his soulstone was Mephisto. He spread his influence across the higher ranks of the Zakarum priesthood and corrupted the surrounding lands of Kurast. The second to awaken was Diablo, courtesy of Archbishop Lazarus, who shattered his soulstone and allowed Diablo to take mortal hosts.[2][5] Diablo was ultimately defeated, but his shattered soulstone could no longer hold his spirit. Like Tal Rasha before him, Aidan plunged the soulstone into his flesh, hoping to contain Diablo's essence.[6][2] It was an attempt that ultimately failed and soon, Diablo, in the guise of the Dark Wanderer, was headed east to reunite with his brothers.[2]

Baal was freed from his prison and Tal Rasha served as his host, though his soulstone fragment was taken from him by Marius, an individual who had traveled with the Wanderer.[7] Regardless, Mephisto was soon freed also, who took his own host. Yet it was here that the Evils' plans began to awry—a group of adventurers who had pursued the Wanderer from Khanduras confronted Mephisto in the depths of the Temple of Light. Even with the soulstone, Mephisto had yet to recover his true strength, therefore the Prime Evil was defeated and his soulstone taken.[8]

Access to Hell had provided the heroes with the opportunity to end the threat of the Prime Evils once and for all. Within the Hellforge was the Anvil of Annihilation, and it was said that anything broken upon the anvil would be forever negated. Were the soulstones to be destroyed upon it, the Evils they contained would be themselves obliterated, and their souls cast into the Black Abyss.[9]

In this regard, the heroes were successful, as the soulstones of Mephisto and a recently defeated Diablo were destroyed using the Hellforge Hammer. Baal and his soulstone remained at large however. And tracking down Marius, Baal retrieved his stone (now named the Shard of Destruction),[2] intent on using it to corrupt the Worldstone.[10][2]

With soulstone in hand, Baal led his forces against the Barbarians. As Baal wrought havoc in his march north, so too did the shard's destructive essence increase.[2] Eventually, Baal gained access to the Worldstone Chamber. The same heroes who had defeated his brothers eventually fought and defeated him, but not before he had fused his shard into the Worldstone, corrupting it with the destructive energies the shard had accumulated. Tyrael, realizing that humankind would be irrevocably corrupted if the Worldstone was left to spread the corruption, was forced to destroy it.[11] The Worldstone and the last soulstone were destroyed, and Baal's spirit presumably sent to join his brothers.[2]

Over twenty years later, a fragment of what looked like the red soulstone was found beneath the Tristram Cathedral.[12]

After the destruction of the Black Soulstone, lingering fragments of the artifact containing the essence of the Great Evils persisted in Sanctuary. These Soul Shards (effectively a type of soulstone) thus contained great power—the power of the Evils themselves. A number of nephalem were able to find and wield these shards, but they had to be careful, given the allure of such power.[1]

Diablo's soulstone is a quest item found in the game files, but it's not used in the actual game.

Mephisto's soulstone is a quest item dropped by Mephisto, which the player needs for The Hellforge quest in Act IV. If the player forgets to pick it up, Deckard Cain will give it to the player if he/she enters Act IV without it. Upon destroying the soulstone, the player gets a rune (if the expansion is installed) and some flawless or perfect gems.

After his transformation, Baal is seen wearing the Soulstone on his neck. He has a habit of stroking it when thinking, and touching it when about to cast spells. Interestingly, his yellow stone is depicted as red during the final battle, but it retains its original color at the siege of Sescheron.

The Red Soul Shard can be obtained in the Anniversary Dungeon of Diablo III.

The Soul Shards were introduced in Season 25. These are a type of soulstone.

The bigger chunk the Wanderer holds 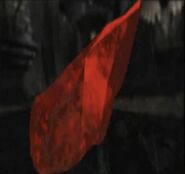