Diablo Wiki
Register
Don't have an account?
Sign In
Advertisement
in: Heroes of the Storm, Nephalem, Barbarians

"From the frozen Dreadlands of the north come the mighty Barbarian warriors. After surviving the destruction of her home and death of her tribe, Sonya wanders Sanctuary in search of battle and a better life for her people."

Wanderer of the North
Sonya of Harrogath[1]

She dislikes magic and has never prayed to Bul-Kathos, as she "has no tongue for it."[1]

Sonya hailed from Harrogath. She wore a set of armor titled the Valor of Harrogath.[1]

Sonya survived the destruction of her home and the death of her tribe. She spent time with fellow refugees, the fear in their eyes becoming etched in her memory.[3] She wandered Sanctuary in search of battle and a better life for her people.[4] She acquired armor and weapons from her foes, and took them as her own. She also encountered demons in the time following the Worldstone's destruction.

Once in her many travels, a man told her to make him a sandwich. In her words, she "sliced him nice and thin."[1]

Sonya appears in Heroes of the Storm as a female representative of the Barbarian class as it appears in Diablo III, phenotypically taking after her. There has been no in-universe use of her character however.

In combat, she retains Wrath of the Berserker, Whirlwind, Leap, Ancient Spear and Seismic Slam skills, and Fury is her passive trait. The passive talents also include Ignore Pain and Nerves of Steel.

It appears that her blades are inspired by Blackguard and Warmonger. Her armor looks similar to Jazeraint Mail. 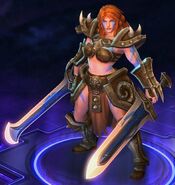 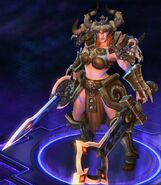