Skeletal Shieldmen are Undead monsters in Act I and Act III of Diablo III. These foot soldier skeletons spawn with large, round, glowing blue shields from which they derive their names. Visually, they are easily distincted by their rusted armor.

Skeletal Shieldmen carry a sword as well as their glowing blue shield, but use it only sporadically, and not with very great effect. Their chief purpose is as a defensive unit, and a phalanx of these skeletons can usually be found in front of Skeleton Archers or a Skeletal Summoner. They block very effectively, thwarting most attacks launched straight at them, but are very slow to turn and can be flanked or simply run past without much difficulty. Blocked attacks will be completely nullified, but after absorbing enough damage, their shield breaks (remaining damage transfers to the skeleton), resulting in the skeleton acting much like their normal brethren. A very powerful hit will kill the Skeleton even with the shield intact.

The shieldmen are slow in moving to and attacking their foes, and their Life is not a great number. Once the shield is destroyed, the skeletons are a minor threat, if any, and they are usually taken down easily.

In Act V, they are replaced by Revenant Shield Guard and Summoned Shield Guard, except for their shields do not break.

Revive, when used on a corpse from skills (instead of monsters), will raise a Skeletal Shieldman fighting for the Necromancer.

A group of skeletal shieldmen 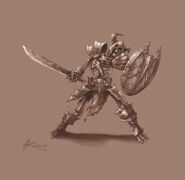 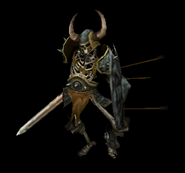 Add a photo to this gallery
Skeleton
Retrieved from "https://diablo.fandom.com/wiki/Skeletal_Shieldman?oldid=169526"
Community content is available under CC-BY-SA unless otherwise noted.