watch 01:14
What is Siegebreaker Assault Beast?
Do you like this video?
Play Sound
For the quest of the same name, see Siegebreaker (Quest).

"The siegebreaker is a monster of legends, of nightmares, and thin whispers in the dark. It is the most prized champion of demon lords because its massive size and strength could turn any battle in its favor. I wish I knew more, but alas...all who have seen it have perished."

The Siegebreaker Assault Beast, Living Siege Engine of Hell is a type of demon.

"I can’t believe he/she slaughtered one of those siegebreaker beasts. It took Captain Haile and a hundred men to kill the last one."
"I wish I could have seen that fight."
"Really?"
"Well, not up close."

Siegebreakers are massive demons. They are the most prized champion of all demon lords because of their massive size and strength; enough to turn any battle in their master's favor. Legends of the Siegebreaker entered mortal imagination, becoming the stuff of nightmare, but all who saw it perished.[1]

During the Siege of Bastion's Keep, at least two Siegebreakers were used by Azmodan. The first was used against the keep, and while slain, it took Hansen Haile and 100 soldiers to bring it down.[2] The second was found guarding the edge of the Arreat Crater, where it was defeated by The Nephalem and Tyrael.[3]

A Siegebreaker is encountered in Act III of Diablo III as a boss in the Edge of the Abyss. After killing it, the player can hear the guards discussing how did they single-handedly dispatched of a beast that usually requires a hundred men to slay. Siegebreaker corpses can be found in the act, but are not fought. More charred corpses of Siegebreakers can be found scattered across the Battlefields of Eternity in Pandemonium, found in Act V.

Grunkk is a non-combat pet designed after Siegebreaker.

The Siegebreaker Assault Beast is one of the six handpicked Boss encounters to return as an Uber Boss, under the title of The Savage Behemoth, Unrelenting Devastator. Its strategies between the 2 forms does not vary at all, even to the same possession of Reflects Damage, but it does not summon Demon Troopers. In return, it has aid from the Uber version of Zoltun Kulle, which can put a hampering on attempts to end its life.

The Siegebreaker first appeared at the 2008 World Wide Invitational, at which Diablo III was first revealed. It had a number of features which did not make it into the final game:

Neither of these were present in the final game, although the former's biting animation can be seen briefly if players pay attention to the background during the quest involving the catapults in the Stonefort. 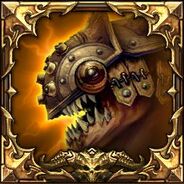 The Siegebreaker may no longer eat off a nephalem's head, but it isn't afraid of eating the head of one of Bastion's Keep's guards. 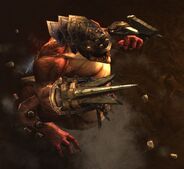 Retrieved from "https://diablo.fandom.com/wiki/Siegebreaker_Assault_Beast?oldid=195678"
Community content is available under CC-BY-SA unless otherwise noted.