View source
"If you're here to defeat Baal, you must prove it! As we speak, Harrogath is under siege by Baal's demons. Catapults rain death just outside the town walls. Baal himself travels up the sacred mountain, having left in charge here one of his most vicious generals, Shenk the Overseer. A ruthless taskmaster, he lashes his own minions into suicidal frenzies on the battlefield. If you wish to prove yourself to us, destroy the monster, Shenk, that commands those infernal catapults outside Harrogath. If you manage to do this, return to me." 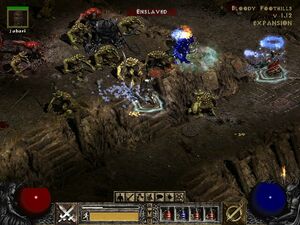 Shenk the Overseer is an Overseer and one of Baal's most vicious generals. He is found at the end of the Bloody Foothills in Act V of Diablo II: Lord of Destruction.

This ruthless taskmaster inflicts Minion Frenzy on his Enslaved minions around him, turning them into Fanatic Enslaved. He must be killed in order to complete the Siege on Harrogath quest.

He is also one of the few Super Unique enemies in the game that does not have any minions.

This section contains facts and trivia relevant to this article.
Community content is available under CC-BY-SA unless otherwise noted.
Advertisement