"The shadow touched me, and darkness spread across my vision until all I could see was blackness. It gave way to a pale light that sapped my strength. It seemed so easy, but instead, I drew upon the last of my will and fought back. Color flooded back into my sight. The shadow was right before me, and I drove my spear through it."

Shadows of Death are absolutely identical to Phantasms and Wraiths in terms of their abilities, but count as Reapers rather than Undead for targeting purposes. They have a melee slashing attack, as well as ranged life drain attack that causes heavy Cold damage at medium distance and slows the victim down. Unlike Phantasms, Shadows prefer to engage enemy in melee. They move quickly and may phase through all kinds of obstacles and impassable terrain, often using it to avoid being hit, spread out or to approach the player from unexpected direction.

In addition to that, a Summoner of the Dead may create Shadows of Death. However, when the Summoner is dead, all his Shadows disperse that instant. 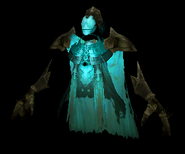 Add a photo to this gallery
Retrieved from "https://diablo.fandom.com/wiki/Shadow_of_Death?oldid=167058"
Community content is available under CC-BY-SA unless otherwise noted.