Seven-Sided Strike is a Focus skill used by the Monk in Diablo III.

When activated, the Monk disappears from the battlefield (and cannot be harmed until the effect ends, minimum 0.25 seconds). Every 0.2 seconds, a random enemy within 20 yards of the cast location (indicated by a glowing glyph on the ground) will suffer a hit for 811% damage as Physical. If there are 7 enemies or more, each hit will find a different target, but if less enemies remain, it can hit the same target more than once. If there are no enemies in range, the effect ends, so using this skill against a moving target can be less effective.

Against Illusionist affix monsters, it is less effective, for most likely the hits will destroy the illusions, leaving the real enemy more or less unharmed. For the same reason, trying to reach a stronger enemy hiding among the lesser foes will waste the powerful cooldown for overkill effect.

As of patch 2.3, the cooldown of this skill only starts after its effect expires.

The skill in use

The Monk's Seven-Sided Strike in action 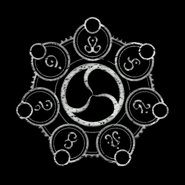