Set Items are special items introduced in Diablo II and continued on into Diablo III. They are like Unique Items, in the way that every time you find the same item, it has the same attributes. However, in general, Set Items are a tad weaker than Unique Items, or so called "Uniques". This is because Set Items are each part of specific sets, and moreover, if you equip the entire set, you will gain an extra set of Bonus Affixes, hence the name "Set Items." Set Items are denoted by their name appearing in bright green.

In Diablo II, sets can be completed even on the Hirelings, who fully benefit from the Set Bonuses.

At first, you had to equip an entire set of items to get any bonus effects at all. With the Diablo II expansion pack Lord of Destruction, a Partial Set Bonus feature was added to the sets that include more than two items. For each item you equip past the first, there is an extra bonus added to the item itself, until you put together the whole set. This means that it is no longer necessary to equip an entire set to get some very useful bonuses. The partial set bonus concept was kept for Diablo III.

Moreover, in Diablo II, some set items gain new affixes as players equip more and more items of the same set. These bonuses are separate from the set bonus, and depend on which pieces the player has got.

Some of the new sets added in Lord of Destruction give particularly interesting bonuses upon completion. Many will give you bonuses that are normally not found on Magic nor Rare Items. One of them (Trang-Oul's Avatar, a set for Necromancers) will even transform you into a Vampire enemy, and give you three of the Sorceress' Fire Skills!

Each class in Diablo II has a set specifically built for them. Upon the completion of these sets, Your character will receive a golden light shining around them, except for when using Trang-Oul's Avatar, your character will transform into a Ghoul Lord, and moreover, when using Natalya's Odium, your Assassin will appear faded. These sets always include class-specific items, i.e. only the class to whom the set is intended for can complete it.

There are other sets beyond these which are also intended for only one class, however they do not award a unique graphical feature. Diablo III has got generic class-specific sets as well.

Set Items in Diablo III are, essentially, a type of Legendary Items, but have some differences though. They can roll Ancient Legendary bonuses as well, with the exact same chances.

Set Items are highlighted similarly to other Legendaries, however a pillar of light will be green instead. The minimap star icon is different as well.

Craftable Set Items drop one recipe for the entire set. There is no need to find extra recipes.

Some sets exist in two variants: pre-70 and 70. Note that different versions of the same set cannot be used to complete each other, but different level items (of the exactly same set, check its name carefully), just obtained at different levels, can. Example: Cain's Set Items of Pre-Level 70 variant are different from their Level 70 versions, and cannot complete each other; but Tal Rasha's Elements Set Items dropped at Level 60 can be used to complete a set of Tal-Rasha Set Items dropped at Level 70.

In addition, Legacy Sets (obtained before patch 2.0) are considered different sets from their post-Expansion counterparts, even if they bear the same name.

While technically being Legendary Items, Set Items in Diablo III very rarely have unique affixes unlike Legendaries, as those are replaced with set bonuses. They can still have affixes that normally are not allowed on that item type, though.

Most sets have two, four or six item types, but some can even number up to seven.

All classes have a minimum of five class sets, including one minor set (two class items in weapon slots), and four or five full sets with six or seven items, usually mutually exclusive. These sets can sometimes be completed by any class (some are entirely class-exclusive, while others are not), but set bonuses are always related to class-specific stats and skills, making the sets entirely useless to other classes. As of patch 2.6.7, an additional set was added for the Crusader and Monk classes.

In addition, Ring of Royal Grandeur is known for reducing set items requirements (i.e. number of set pieces to complete the set) by one, to a minimum of two. This allows player to complete more sets on the same character, gaining more set bonuses. Alternatively, it allows boosting sets with Legendary items that have unique and irreplaceable properties: the best example is Raiment of the Jade Harvester, which doubles its damaging potential with Quetzalcoatl, but the latter can only be equipped if the Witch Doctor makes use of the mentioned ring. An alternate method may be using Kanai's Cube to extract a specific power to complement the set.

Unlike Diablo II, Set items equipped on followers provide no bonus neither to the player nor to the follower. Pieces of the same set on both follower and player cannot complete each other.

As of patch 2.2.0, sets also display the slot of each item on the list.

Unlike Legendary items, if a new patch changes the set bonuses, set items are typically changed retroactively, while legendary items that gain new special affixes must be obtained anew. The reason for this is that set items work in tandem, and making these changes non-retroactive would force players to find the whole set anew.

Set items may be transmuted in Kanai's Cube, in order to extract their Legendary power (if they have one), reforge the items (with a chance for Ancient item), upgrade a Rare item to (potentially) a set piece, or randomly change a set piece into another item of the same set. The latter, though, has some limitations, but it is a good method of obtaining the last missing part of the set in case player has any duplicates.

Players who participate in Seasons and beat the Seasonal Journey receive Haedrig's Gift, which contains pieces of a class set (exact set changes every Season). Three different chapters per Season will each reward 2 pieces out of 6.

Set Dungeons were introduced in patch 2.4, as a way for players to test their skills with using the full class sets. Each of the 28 set dungeons, when completed, awards a banner sigil.

Completing 4 dungeons for a single class will award a special pennant (upgraded version if completed at Mastery rating).

Completing all 24 set dungeons (without Necromancer's) will award a special set of wings (upgraded version with Mastery rating). 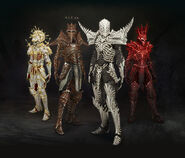