"Not all of the hazards of Pandemonium lie above ground. The tunnelers roam just beneath the surface, breaking through to snatch prey in their enormous jaws. And my heroic friends ask why I wish to stay inside the fortress! Ha."

Scavenging Tunnelers can be found in the Battlefields of Eternity in Act V. They are Ancient Beasts, and replace Rockworms.

Tunnelers appear from below like Rockworms, trying to emerge as close to player as possible, warning of their approach by violent tremor. Once emerged, they will either snap the player with their jaws or launch a slow-moving, but highly damaging Fireball projectiles. If the latter proves unsuccessful and there are no targets in melee range, Tunneler will re-emerge at a different location. While underground, Tunnelers may not be harmed in any way. They may not burrow 4 seconds after emerging.

Unlike Rockworms, Tunnelers do chase the player for a reasonable distance. In addition, they move underground almost instantly, emerging at a different location within a second if necessary. Escaping groups of Tunnelers may be a challenging task without relocation skills.

Like Rockworms, Tunnelers are immune to most forms of Knockback. 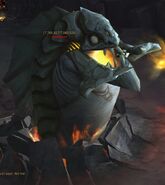 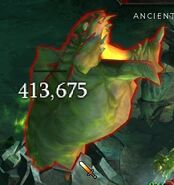 Scavenging Tunneler emerging from underground
Add a photo to this gallery
Retrieved from "https://diablo.fandom.com/wiki/Scavenging_Tunneler?oldid=166568"
Community content is available under CC-BY-SA unless otherwise noted.