Start a Wiki
For the demon enemy from Diablo I, see Scavenger (Diablo I).

"Scavengers are ugly, pathetic creatures who survive off of carrion and corpses too diseased to attract any other carnivores. I did once meet a raggedy fellow who claimed that he had trained one of the beasts to bring him large rats to eat, but I'm sure the story is utter nonsense."

Scavengers (a.k.a. Leapers, Reapers or Burrowers) are a type of animal enemy that appear in Diablo III.

Scavengers are ugly creatures who survive off of carrion and corpses too diseased to attract any other carnivores.[1] Unlike most carnivores of this type however, they are extremely aggressive and will not hesitate to attack those unfortunate enough to encounter them.

Scavengers have powerful legs which they use for swift springing attacks, striking at vulnerable faces and throats. Their anatomy bears a striking resemblance to that of the leapers of the Aranoch desert, and thus, many researchers classify the two groups as part of the same family of creatures. A demonic variant of the Scavenger plagued adventurers in and around Tristram during the darkening of the town.[2]

Appearance-wise, Scavengers look downright hideous, having wrinkled faces with mouths that constantly chatter an annoying cry that rile even Dune Threshers up. They have a skull similar in shape to real world hyenas, built for crushing bone while searching for any usable meat in a carcass.

They have a black mane from their heads to their mid-backs and their rear ends have a short and hairy tail like that of a horse. But their most striking, albeit disproportioned, feature are their limbs, which are actually as long as their torsos. Their hands are lean but have palms as large as their heads complete with long nails that are used for burrowing beneath the ground. These can also be used to great effect as weapons against what they think as potential competition to their meal. Even though they rely on carrion for their food, they will not hesitate to create carrion using their sharp claws.

They look more like animals than demons, and are somewhat badger-like in their furry, striped appearance. But they leap and dart around wildly, and seem quite capable of swarming an unwary hero by sheer numbers. Due to their ability to burrow, Scavengers can even escape combat or ambush the unsuspecting from below.

Scavengers are more dangerous than they seem. They move with blinding speed and often swarm players with their numbers. They make difficult targets due to their speed, their constant moving, and their ability to burrow.

Using snare abilities or cold attacks can help gain control of the situation. Outrunning them is not advised as Scavengers can easily catch up with you. Scattering their packs and swiftly taking them down are your best options. 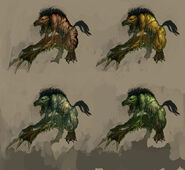 A pack of Scavengers 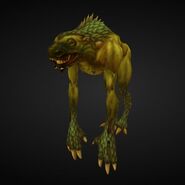 Retrieved from "https://diablo.fandom.com/wiki/Scavenger_(Diablo_III)?oldid=166915"
Community content is available under CC-BY-SA unless otherwise noted.