The Rogue Encampment is the starting location in Diablo II, where you undertake your goal of attempting to catch up with Diablo before he frees his brothers and Hell is unleashed on Sanctuary as the Prophecy foretells.

The Rogue Encampment is a makeshift town located right next to the Blood Moor. As its name designates, it is the camp set up by the survivors of the battle at the Rogue Monastery. The Rogue Monastery was attacked by the forces of Hell in an effort by Diablo to create a stronghold on Sanctuary against the forces of Heaven, and destroy opposing mortals, as the Sisters of the Sightless Eye had.

Many rogues died or were corrupted by the evil and started roaming the countryside along with other tainted creatures and demons. Such rogues include Bloodraven (the Rogue heroine from Diablo I), Coldcrow and Andariel (who took over the body of a Rogue and transformed).

Outside the encampment there is a vacated house and stable.

Though many of the Sisterhood perished in the battle at the Monastery, fortunately many of the crucial members of the sisterhood survived, including:

A few other helpful travelers also live in the camp:

There are six quests to be found and/or completed within the Rogue Encampment:

The following waypoints can be found and used (after activation) in Act I:

The camp is surrounded by a protective wooden fence in which the logs have been sharpened at one end and tied together by rope. There are also remnants of stone walls surrounding the camp, which are usually in front or behind the wooden fence that serve as extra protection. For guards, there are rogue troops not only at the entrance, but also scattered throughout the encampment, who are commanded by Kashya. 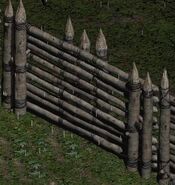 River around the Encampment

Stable just outside of the Rogue Encampment

Towns in the Diablo series