"What do I know of the Realmwalker? Very little. It roams the outskirts of Pandemonium. A lumbering giant with a gaping hallow at its core. Somehow, it can hide its body away, disguising it as a mere portal. Those who pass through it are trapped in a distant world, never to be seen again."

The Realmwalker, Planar Guardian, is a Super Unique Ancient Beast monster in the Battlefields of Eternity. It has a huge Life pool, and in addition to melee attack (which it rarely uses due to its very slow movement), it bombards the area with volleys of fireballs, each spawning a Scouring Charger (or Lobber) on impact.

When it is killed, it will open a portal to the Realm of the Banished.

A Realmwalker in the ground before it is engaged

Realm of the Banished that appears when the Realmwalker is killed 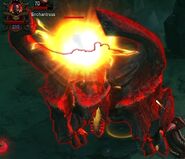 Add a photo to this gallery
Retrieved from "https://diablo.fandom.com/wiki/Realmwalker?oldid=166562"
Community content is available under CC-BY-SA unless otherwise noted.