View source
watch 01:37
Who is Rakanoth?
Do you like this video?
Play Sound

"In the beginning, Rakanoth served Andariel, the Maiden of Anguish, with efficient brutality, for his touch may open up many painful wounds. He was also the warden of Izual during many long years that the angel suffered in Rakanoth's own Plains of Despair, but he has quit his realm unexpectedly in recent times."

Diablo Immortal (flashback only)
Diablo III
Book of Tyrael
The Story of Diablo
Rakanoth, the Lord of Despair, was a powerful demon and servant of Andariel.

"You think yourself free from the chains of fate, Nephalem. But all will kneel before Lord Diablo!"

Rakanoth served as a warden to the imprisoned angel Izual, whom he guarded in the Plains of Despair - his own domain in the Burning Hells.[1] He also fought in the Great Conflict, battling Tyrael on at least one occasion.[2]

At some point, Rakanoth and a group of demons battled against Kion and his Immortals.[3] The battle apparently went in Rakanoth's favor, but later, at the same site, Rakanoth was confronted (and apparently defeated by) Kion's sister, Akeba.[4]

When Diablo incorporated the essences of the six other Great Evils through the Black Soulstone and became the all-powerful Prime Evil, he emptied almost all of Hell's various realms in order to create a grand army for a massive assault on the High Heavens. Rakanoth was among those he summoned and was assigned the task of guarding the archangel Auriel holding her captive in the Library of Fate. However, the Nephalem managed to rescue the archangel by slaying Rakanoth in combat, thus bringing hope back to all of angelkind in their darkest hour.[5]

Rakanoth appears as a boss in Act IV of Diablo III. He can be found in the Library of Fate. He must be defeated in order to free Auriel and complete "The Light of Hope" quest.[1]

Upon death, he has a chance to drop Hand of Despair.

Similar to Izual, he is also a heavy melee boss but doesn't move as much. However, this makes him even more dangerous since his most damaging abilities are used when far away from the player. This puts each player at the dilemma of either suffering heavy damage in melee or running around, facing the risks of ranged attacks.

On Torment difficulty, he has a hard Enrage timer, his Teleport Charge cooldown will be reduced to zero after 3 minutes.

Rakanoth is one of the 7 Bosses of Diablo III to have an Uber appearance: The Vile Executioner, Vicious Blademaster. His Uber version sports no change in strategy whatsoever, but he fights alongside The Foul Desecrator, giving some strategies on him a bit more trouble than players would have fought in Act IV.

Perdition is the Rift Guardian variant of Rakanoth. 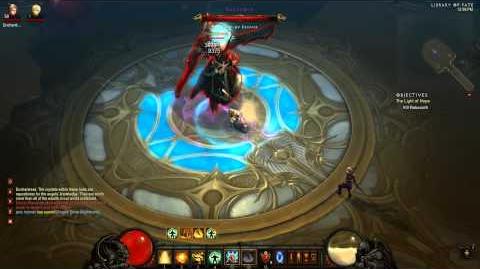