Rakanishu's Blade is a Magic sword that drops from a randomly spawned event in the Dahlgur Oasis. It is purported to be the weapon of the Fallen "demigod", Rakanishu.

It is not located within a dungeon, but can be found in the open, explorable world of the Oasis. Spawn points may vary, but it can spawn in the Southeast portion of the map from the waypoint.

The blade has much higher chances to drop in Campaign Mode than in Adventure Mode, and is a not a guaranteed drop (much better odds are on Normal difficulty) from the Shrine of Rakanishu. As of patch 2.4, the blade drops from the shrine, not from Avatar of Rakanishu that spawns at the climax of that event.

Attacking Bashiok with this blade equipped will reward the player with the Bashanishu achievement.

While of little gameplay use, the blade can be used for Transmogrification.

Rakanishu, Lord of the Fallen, drove his minions to frenzied battle. They could often be heard screaming his name as they rushed headlong to their deaths. 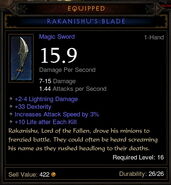 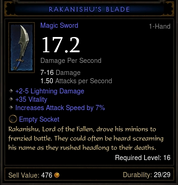 Add a photo to this gallery
Retrieved from "https://diablo.fandom.com/wiki/Rakanishu%27s_Blade?oldid=163501"
Community content is available under CC-BY-SA unless otherwise noted.