Prime Evil Wings are an aesthetic wing set for Diablo III, available for players who logged in during the Destruction event starting at June 29, 2020 (the 20th anniversary of Diablo II).

Only one set of Wings can be equipped at a time, and these will be visible even on character selection screen.

"Where Hatred and Terror tread, Destruction is sure to follow" - Mephisto 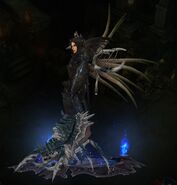 Retrieved from "https://diablo.fandom.com/wiki/Prime_Evil_Wings?oldid=198192"
Community content is available under CC-BY-SA unless otherwise noted.