The term Prime Evil is one with several definitions:

At the beginning of time, there existed a single, near-perfect entity called Anu. Anu desired to purify itself of all darkness within itself and cast out its darker half. This dark essence congealed and formed the seven-headed creature called Tathamet. For aeons, Tathamet and Anu battled against one another endlessly until they unleashed the totality of their power. In the end, both were vanquished, leaving only their fractured essence behind. As Tathamet's body formed the foundation of the Burning Hells, each of its heads became a greater demon. The three dominant heads became the Prime Evils, while the remaining heads became the Lesser Evils. The three Prime Evils collectively established themselves as the leading power among the Burning Hells. These were Diablo, Lord of Terror, Mephisto, Lord of Hatred ,and Baal, Lord of Destruction[1]—the first of all the Evils of Hell, and the most powerful.[2] They endeavoured to maintain a strict rule over the demons of Hell, each powering one another—as terror leads to hatred, hatred leads to destruction.[1] However, their unity was fragmentary at best[3] and while Mephisto functioned as their leader (by virtue of him being the eldest), he would pit his brothers against one another if it suited his purposes.[1]

As Tathamet had given rise to the Burning Hells and its rulers, so too had Anu given rise to the High Heavens and the Angiris Council. The result was the Great Conflict, fought over the Worldstone.[1] Being the eldest and strongest of the Evils, the Three Brothers were responsible for many victories against the armies of the Light. Although even they were never able to breach the Diamond Gates of the High Heavens, the Three were justly feared by enemies and subjects alike.[4]

The world was young, then, and only a few knew it as Sanctuary, or knew that not only did angels and demons exist, but some of them had caused Sanctuary to be in the first place. The names Inarius, Diablo, Rathma, Mephisto and Baal—to name a powerful and often dread few—had not yet been whispered on mortal lips.
—From the Books of Kalan, First Tome, Second Leaf[5]

The Great Conflict came to an end when the Worldstone mysteriously disappeared. Millennia later however, the Prime Evils would discover what the stone had been used to create—Sanctuary. Thanks to the Vizjerei, Mephisto, Baal and Diablo were made aware of the existence of humanity. Sensing the latent power of the nephalem within them, they reasoned that if turned to their side, Man might make a powerful ally. So it was that the Three founded the Triune, adopting the namesakes of Dialon, Spirit of Determination, Mefis, Spirit of Love and Bala, Spirit of Creation. The rogue angel Inarius, seeking to counter the influence of the Three, founded his own religion, thus beginning the Sin War. It ended with a truce between Heaven and Hell, that humanity be free to choose between light and dark.[1]

The events of the Sin War created a rift between the Prime Evils and Lesser Evils. The Primes had kept humanity's existence a secret from their Lesser Evil counterparts,[1] and the Lesser Evils were frustrated with the Primes' fixation on humanity, and perceived abandonment of the Great Conflict. Thus began a sequence of events that led to the Dark Exile, as Hell erupted in civil war between those loyal to the Prime Evils, and those loyal to the Lesser Evils, led by Azmodan and Belial. Despite annihilating a third of the rebels, the Prime Evils were defeated and, weakened and bodiless, were banished into the mortal realm. Azmodan believed that with the Primes trapped in the mortal realm, Heaven would be forced to shift their attention, which would allow Hell to seize the opportunity to strike.[4] But in truth, the Dark Exile had been masterminded by the Prime Evils themselves. The fallen angel Izual told them of the soulstones and how they could be corrupted.[6] Through the soulstones, they could corrupt the Worldstone, and through it, humanity as a whole.[1] The Prime Evils would be imprisoned by the Horadrim, but it was to their long-term benefit. Mephisto would corrupt the Zakarum. Baal shattered his soulstone, but the mage Tal Rasha willingly became his mortal host where he could contain the demon himself. Diablo was the last to be imprisoned, and buried in the catacombs of the Tristram Cathedral.[1] It was during this time that Diablo learnt of a method to combine the Seven Evils into a single being. It was an idea he would put into practice much later...[7]

The Return of the Three

"My Lord spoke to me of his two Brothers, Mephisto and Baal, who were banished to this world long ago. My Lord wishes to bide his time, and harness his awesome power so that he may free his captive brothers from their tombs beneath the sands of the East. Once my Lord releases his Brothers, the Sin War will once again know the fury of the Three."

Hundreds of years after their imprisonment, the Primes returned to wreak havoc in the mortal realm. Diablo was the first to be released, taking control of the warrior Aidan. Taking on the guise of the Dark Wanderer, he headed eastward and employed Andariel once more to derail any would-be pursuers. Despite the efforts of a group of mortal heroes and the archangel Tyrael himself, who had been imprisoned by Duriel, he succeeded in freeing Baal from his prison tomb. The pair crossed the Twin Seas into Kurast, where they reunited with Mephisto, in the depths of the Cathedral of Light. Here, the Three devised their final stratagem. Diablo would cross over into Hell, where he would rally the legions of Hell still loyal to the Three. Baal would head north to corrupt the Worldstone, thereby enslaving all of mankind and its nephalem potential to their will. With an army of nephalem as their vanguard, the Primes would quickly overwhelm Hell's traitorous legions and re-establish their rule. It was also here that their plan began to go awry. The heroes defeated Mephisto, who had remained behind to destroy any opposition to their plan, and imprisoned him in his soulstone. In Hell, they confronted Diablo and did the same. Upon the Anvil of Destruction, both of these soulstones were destroyed[1] and (in theory) sent into the Black Abyss.[6] Finally, there was Baal. Although he successfully corrupted the Worldstone, he was defeated soon afterwards. Tyrael destroyed the Worldstone to prevent humanity from being corrupted, and in the resulting destruction, Baal's body was obliterated. Deckard Cain believed that his spirit was sent into the Black Abyss to join his brothers.[1]

"I LIVE! But I am more than I once was. The Seven Evils are one within me. I am the Prime Evil!"

The Prime Evil was the combination of all the Great Evils into one being. Twenty years after Baal's defeat, the witch Adria, who had been in league with Diablo, sought out the Black Soulstone. With it, she was able to contain the essences of five of the Great Evils (Mephisto, Baal, Diablo, Andariel and Duriel).

Diablo had engineered a gambit to finally defeat the High Heavens once and for all. While he was gaining control over Aidan's mind, he conceived a daughter with the witch Adria, named Leah. Twenty years later, the last Lords of Hell Azmodan and Belial began their invasion of Sanctuary in search for the Black Soulstone with the intent of becoming the Prime Evil themselves. Belial took control of Caldeum while Azmodan began mustering his forces at Mount Arreat. A group of Nephalem heroes under the guidance of Adria, Leah and Tyrael resurrected the renegade Horadrim mage Zoltun Kulle, the creator of the Black Soulstone, to complete it. The heroes were forced to battle the traitorous Kulle, who attempted to use the Soulstone for himself and reign over Sanctuary. They later liberated Caldeum from Belial and finally confronted the Lord of Lies and captured his spirit. The heroes then turned their attention to Azmodan, who began his invasion from Mount Arreat and besieged Bastion's Keep. After a long fight against his armies the heroes confronted Azmodan and battled the Lord of Sin. They were victorious and Azmodan's essence was captured by the soulstone. Adria then betrayed the heroes and performed a ritual to use Leah as Diablo's vessel. Diablo (or Tathamet reborn) and his forces assaulted the High Heavens and shattered the Diamond Gates with the intent of corrupting the Crystal Arch. The heroes fought against the Prime Evil and defeated it, saving Sanctuary and the High Heavens. However, they were unsure if the Great Evils had been truly defeated.

The Prime Evils comprise the Three - the Demon Lord brothers and absolute rulers of Hell: 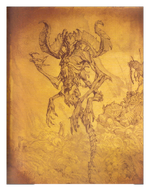 Mephisto, the Lord of Hatred, is the eldest brother. He was originally captured by the Horadrim in the deserts near the city of Lut Gholein, the same place in which Baal was captured. He was moved to Kurast and imprisoned inside a Soulstone, and was kept locked inside the Guardian Tower beneath the temple city of Travincal. His eventual corruption of the regional religious heads almost ensured his release, except he was eventually defeated by the pursuing adventurer. Being the Lord of Hatred, he is the most intensely evil brother, whose greatest weapon is his victims' irrational hatreds. 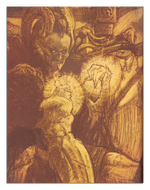 Baal, the Lord of Destruction is the last brother in the storyline of the Diablo games to be vanquished, and also the middle brother. He was captured in the deserts of Aranoch, at the site where his elder brother Mephisto was incarcerated earlier. Was the only brother to escape the pursuing adventurer. He raised an army of demons and minions and attacked the barbarian homelands of the north, laying siege to the capital city, Sescheron, and finally besieging the last city, Harrogath. He was stopped by the pursuing adventurer and eventually defeated. Being the Lord of Destruction, he is known for his unsparing and annihilating characteristics. 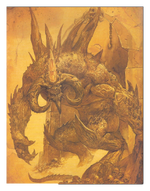 Diablo, the Lord of Terror, is the youngest brother. He was responsible for the enslavement of mankind with violent images of bloodlust and terror; his prime weapon being the victim's fear. He was originally defeated under the labyrinths beneath Tristram but corrupted the hero who slew him and sought out his brothers, but then was defeated in Hell, by the pursuing adventurer. The aura of the Lord of Terror is the most fearsome among angels and demons alike.