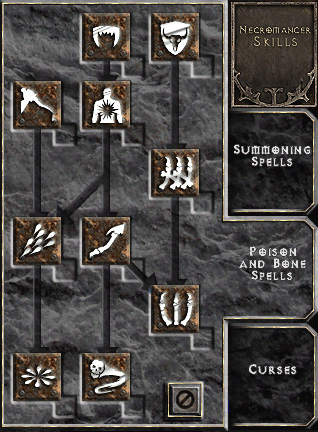 The Necromancer's attack spells focus on dealing magical damage using bones, except for Corpse Explosion, which is self-explanatory. Teeth is your basic spell, which generates small missiles that spread out in a fan shape. Bone Spear is a powerful spell that sends a bone missile out in a straight line. It is extremely effective against groups of crowded monsters as it has a piercing ability that can hit multiple monsters in a straight line. Bone Spirit is another favorite spell of the Poison and Bone skill tree. Although it can only hit one monster at a time and costs more mana than Bone Spear, it deals a lot more damage per hit and can track or hunt enemies.

The only direct attack spell that doesn't use bones is Corpse Explosion. It is one of the Necromancer's best attack spells, if not the best. Corpse Explosion deals damage based on the percentage of life the corpse had while it was alive, dealing damage equal to 70%-120% of the monster's total hit points. Corpse Explosion deals both physical and fire-based magical damage over a small to medium sized area, which makes it difficult for anyone to resist its damage. In short, if you need a direct damage spell for your Necromancer, this is it.

As the name of the skill tree suggests, you can also learn poison spells to slowly kill your foes. Your first and most basic poison spell is Poison Dagger, which adds poison damage to your melee attacks. Poison Explosion turns an enemy's corpse into a gas bomb. It's ideal in crowded places, but not much anywhere else. The last poison spell is Poison Nova. It can deal large amounts of poison damage over a fairly short time, but it costs a lot of mana to use. It essentially will poison everything on the screen, assuming there are enemies that can be poisoned within your view.

Along with attack spells, the Necromancer also has several defensive spells in this skill tree. Your first spell is Bone Armor, which acts as a temporary shield that absorbs all physical damage up to a certain amount. The other protective spells, Bone Wall and Bone Prison, create temporary barriers to prevent your enemies from reaching you. Although Bone Wall and Bone Prison are fun spells, their usefulness is questioned by some players, whilst others find them useful because they can be used as "tanks" because of their increased life in Nightmare and Hell difficulties.

Retrieved from "https://diablo.fandom.com/wiki/Poison_and_Bone_Spells?oldid=161239"
Community content is available under CC-BY-SA unless otherwise noted.