"The Horadric scrolls describe hulking phasebeasts as "sin made flesh." Azmodan granted them great power, allowing the beasts to shift in and out of sight at will. It is believed that the Lord of Sin only looses the phasebeasts against uncommonly clever enemies who cannot be bested with tooth and claw."

Phasebeasts (a.k.a. Warping Horrors) are a type of demon in Diablo III, encountered in Act III and in Hell Rifts.

These hulking demons have the ability to teleport at will and attack from an unexpected direction, an ability granted to them by Azmodan.

Phasebeasts have a very strong melee attack, and deliver their blows at shocking speed. They also move quickly, and may teleport anywhere within their line of sight (often used to spread out and evade AoE attacks). However, for their size, they have a relatively low Life pool.

They are most dangeous with the Fire Chains monster affix, as they can surround the player in a fraction of the second with no means to stop them. In a manner of speaking, elite Phasebeasts have one more monster affix than normally permitted. 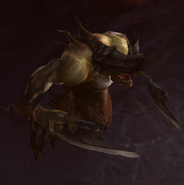 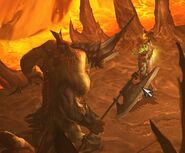 Add a photo to this gallery
Retrieved from "https://diablo.fandom.com/wiki/Phasebeast?oldid=166763"
Community content is available under CC-BY-SA unless otherwise noted.