"All that grows must also wither and die. All dies and rots, and will then nourish the living. This is the Great Cycle of Being, and we, the Priests of Rathma, use our dark art to create it. Though most do not understand us, we go where we are needed. My master has learned that a star fell in the west, drawing the dead from their graves. He commands me to journey to Tristram and return them to their rest. For if the Cycle is not upheld, it would mean the end of all things."

The Necromancer is a seventh playable class of Diablo III and added in Diablo III: Rise of the Necromancer. It was revealed at BlizzCon 2016. The core concept is based on the original class of the same name.

"Death...has ravaged our world. And the Balance that sustained us...has been lost. We feared this day would come. When the lands are ruined, and the champions of the Light can no longer save those in need. But I will. For I wield the power they cannot. And a new army of the dead shall rise at my command. All who threaten the Balance... beware."

A nephalem,[1] this young, enigmatic Necromancer[2] has a strong, dark personality, and is able to see things which other mortals cannot.[3] He/she holds the rank of acolyte,[4] and possesses no relation to the Necromancer who defeated Diablo two decades prior.[5]

This Necromancer was the student of Master Necromancer Ordan[6] and trained for many years.[7] In 1285, Ordan learnt of the coming of the Fallen Star, which had awoken the dead in Khanduras. He bid his student travel there to return them to their graves. The Necromancer sensed a need for their unique power and answered the call on behalf of their order[2] despite leaving with their training incomplete.[6]

"As a master of the dark arts, you wield the powers of life and death necessary to restore the Balance! Necromancers are powerful spell casters who lay waste to their enemies using curses and reanimation—along with an obedient cadre of pets. This new class employs a controlled gameplay style using the raw materials of life: blood and bone."

Necromancers in Diablo III are very similar to the Diablo II class, and retain most of their skills. In combat, they rely on bone and blood spells, Curses, Golems and undead minions. The three Elemental Damage types are Poison (blight), Physical (blood and bone) and Cold (chill of the grave). As such, Convention of Elements is especially effective for Necromancers.[8]

The Necromancer's core stat is Intelligence.[9]

The Necromancer is available in the Rise of the Necromancer pack, released at the same time as patch 2.6.0 came out. The pack was released on June 27 of 2017, and costs $14.99 USD in North America. To use the pack, one needs to have Reaper of Souls installed for PC or have the Ultimate Evil Edition for console.[1] New achievements were implemented along with the Necromancer.[10]

The Necromancer is playable in both Campaign and Adventure Mode, fully voiced, and has new tomes to flesh out their backstory.[3] New technology has been developed for the Necromancer, as it's an effects-heavy class. The player using the Necromancer will see the full effects of skill-use, while players in a party will see a more basic visual display.[11]

"Priests of Rathma favor the use of unerring scythes. Their scythes are used not to hew crops, but to collect the life force of their foes, and to slice open corpses, powering some of their most horrifying spells. Whether they wield massive curved blades at the end of long poles, or curled, light blades more appropriate for finely harvesting organs, necromancers are deadly with any scythe. They’re also trained in the use of phylacteries, unusual objects that enhance their power over the dead.."

The Necromancer originally had less than four Sets, to leave room for the community to come up with new playstyles and have those added onto new sets[9]. Eventually, a total of 4 full sets was given, each complete with a Set Dungeon. These do not count towards Wings of the Dedicated and Wings of Mastery, instead rewarding their own two pennants.

Playstyles are extremely varied for the class. There are five Necromancer sets, all of them level 70 only:

The aesthetics for these sets are a "Plague Doctor"-esque set, Ossuary construct-themed set, a Dracula-esque set, and an Gothic-esque set with over-the-top gold elements. Some obvious Necromancer themes are better represented in items, sets, or animations rather than skills. For instance, Priest of Rathma themes are present in items. The developers tried to avoid too many class-specific items for the Necromancer.[8]

One-handed and two-handed Scythes are the Necromancer's class weapon type, and Phylacteries are off-hand items (replacing Shrunken Heads).[9] They can also use shields and all other melee weapon types except polearms and class-specific items.

Trag'Oul's Wings are a special reward for collecting all Necromancer class achievements (can be used by any class once obtained).

The Necromancer's resource is called Essence and caps out at 200. It does not regenerate automatically, but is only gained from skills.[9]

The Necromancer was designed with three themes: Blood and Bone, Frost, and Blight. Blood skills are more powerful, but cost health; Frost isn't about blizzards or frostbolts, but more about the cold and isolation surrounding graves and death; Blight, similar to a death and decay theme, encompasses debuffs, snares, and the idea of things withering away.

Necromancer Pets are all Active/Passive, like the Monk's Mantras, letting the player command them.[9] There is no pet command interface different from the standard UI.

Monster Corpses in the world serve as a secondary resource for some skills. They are only visible to Necromancers, and appear regardless of whether or not an actual monster corpse was destroyed.[9] There is a whole category of skills called Corpses, devoted to different ways of utilizing them, such as detonating them for area of effect damage, using them to create deadly missiles, consuming them for Essence, or reanimating them as minions.[9] Because many Necromancer skills are focused on corpses being available, one should anticipate swapping skills based on current situation.

For group play, each Necromancer sees their own corpses. For same screen co-op on consoles, corpses may have two charges. Corpses eventually despawn when off screen.[8] There are skills and skill runes that can create corpses so that player always has access to some even if there are no lesser enemies around.

A lot of Necromancer Blood skills cost Life along with Essence, so there are a lot of mechanics built in to recoup lost health.

Originally, there was no special Shapeshift spell, just like with Witch Doctors,[12] but Land of the Dead took this role later.

Most Necromancer skills feature an optional Poison Skill Rune, however, as the Witch Doctor is heavily based on poison, the developers didn't want the Necromancer to be too similar in this regard.[10]

"There’s a certain appeal for a lot of people in playing the anti-hero. And that’s what the Necromancer represents, the darkest of the classes in that world, but one that is also doing good everywhere they go. There’s a kind of juxtaposition between good and evil, and from there a grey line where the Necromancer lives."

The Necromancer's implementation in Diablo III came out of a "game jam session"; a practice Blizzard employs where members of a team get a few days, or even up to a week, to "go wild" in regards to generating ideas. Out of one such session came the idea of bringing the Necromancer into Diablo III.[16] The Diablo II Necromancer was the jumping off point for the Diablo III version.[5] The idea was to see if the developers could take the original class, and adapt it for the faster-paced, more skill-orientated Diablo III. The concept was well received, and the game jam session became the "create the Necromancer exercise." This was around the time when Blizzard was looking at the upcoming 20th anniversary of the Diablo series, so it seemed appropriate in their eyes to bring the Necromancer back.[16] When implementing the class various ideas were pitched from various departments within Blizzard. This included a "king of the dead," "the cryptkeeper," and "the hunter" concepts, reflected in the Necromancer's armor design. What was settled on was the "commander" concept and by extension, the "rock star" idea, of leading an entourage of skeletons.[17]

In an early build, the Necromancer had the ability to teleport.[16] It has been replaced with Blood Rush since.

By the event, the Necromancer was still in development, with only the male model finalized.[1] As of December 2016, the Necromancer's skills were still being developed.[10]

The Necromancer's skills are designed to be "grounded and visceral." They are based on the visual identity of the Necromancer, with the intention of reflecting the dark and sinister nature of the Diablo II Necromancer.[20]

The developers practiced "DoT avoidance" - meaning they wanted to focus on more hard-hitting, visceral skills. Travis Day wanted to avoid runes that were straightforward, obvious choices (for example, simply dealing more damage for that particular skill), instead, Necromancer runes are intended to be more focused on trade offs, such as lowering a skill's radius for increased damage.

The developers learned a lot about cheat death passives with the Crusader, and they realized all of the passives should be on the Crusader's level.

Poison skills, such as Poison Nova, Poison Dagger, and Poison Explosion won't be carried over from Diablo II, as the Witch Doctor covers a lot of potential Poison skills that could be used in the Diablo III Necromancer. The developers didn't want to force Poison skills if they weren't viable. Poison will be represented in the "Blight" theme.

Female Necromancer in the menu 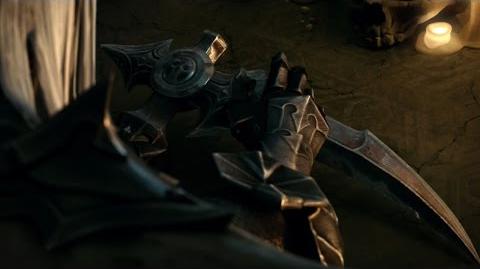 Retrieved from "https://diablo.fandom.com/wiki/Necromancer_(Diablo_III)?oldid=184552"
Community content is available under CC-BY-SA unless otherwise noted.