Start a Wiki
The following article contains information from the Diablo I expansion Hellfire, which was not made by Blizzard Entertainment. Thus, it is not considered canon.

Na-Krul was a demon that was imprisoned by Diablo himself, who returned to plague Tristram.

Na-Krul was banished to the Void by Diablo.[1] However, during the Darkening of Tristram, he was freed by a Dark Mage.[2] The mage was able to hinder the demon through arcane magic and encase it within walls, but feared that the demon would be too powerful to defeat unless the grimoires he left behind were used.[3] The mage later perished.[2]

Na-Krul intended to rule over the Burning Hells, and harbored ill will towards humanity as well. However, his plans were thwarted by a hero who descended into the Demon Crypts and defeated him.[1]

Na-Krul is the boss of Diablo: Hellfire. He is similar to Diablo in strength, but the fight is slightly easier as he lacks the hordes of enemies that accompany Diablo in his correspondent boss fight. He also lacks any magical attacks, but moves and attacks quickly. Prior to the fight, the player can weaken Na-Krul beforehand by reading three spellbooks in front of his room. Releasing Na-Krul through this method cuts his Life in half, and reduces his armor rating by nearly as much. The correct order is as follows:

Alternatively, a player can free Na-Krul simply by using a lever. 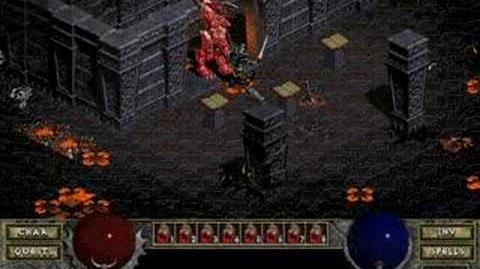 Diablo Hellfire - Na-Krul
Add a photo to this gallery

Retrieved from "https://diablo.fandom.com/wiki/Na-Krul?oldid=180759"
Community content is available under CC-BY-SA unless otherwise noted.