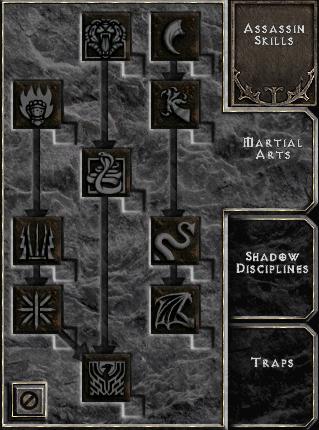 Intrinsic to the Assassin's arsenal of abilities is her incredible prowess in the mysterious Martial Arts style of the Viz-Jaq'taar. Martial Arts skills come in two forms, Charge-up Skills and Finishing Moves. A Charge-up Skill is an attack that adds a "charge" for each successive hit within a short time frame. While each Charge-up attack deals normal damage, the charges continue to accumulate until triggered or until the time limit runs out. To trigger the accumulated charges, strike a monster with either a normal attack or one of the Finishing Moves. A Finishing Move doesn't just trigger the release of the accumulated charges-it also adds a powerful effect of its own. Furthermore, by building up a succession of different Charge-up Skills, Assassins can generate a potent combination of effects. Assassins are specially trained in the use of exotic Claw-class weaponry, and some of their skills can be used only when armed with these weapons.

You can use any one or two-handed weapon with Tiger Strike, Cobra Strike, and Phoenix Strike which means you can combine those skills with a Shield and a good one-handed weapon if you choose. They do not use two weapons at once, however, only the damage of the first weapon is used.

Retrieved from "https://diablo.fandom.com/wiki/Martial_Arts?oldid=67512"
Community content is available under CC-BY-SA unless otherwise noted.