Diablo Wiki
Register
Don't have an account?
Sign In
Advertisement
in: Pages with reference errors, Coven, Boss,
and 3 more

"I was always more powerful than Maghda, but that did not mean I was greater. Neither of us were. We complemented each other. I, the fire and the passion. She, the insight and the control."

Leader of the Coven
Servant of Belial

Diablo Immortal
Diablo III
The Art of Diablo III
Book of Tyrael
Book of Adria: A Diablo Bestiary
Maghda was a witch, a minion of Belial, and the ruthless leader of the Coven.

"When I joined the Coven, it was weak and idle. The leaders were content to do nothing, while the Prime Evils were imprisoned. I convinced another witch to help me poison them, and together we took control. She...left some years later, but I continued, bringing the Coven to glory under Lord Belial."

Maghda's origins remain a mystery, though a storm of dark rumors and lies surrounds them. Of what is known as fact is that in her youth, Maghda was a member of a group of witches that operated in Westmarch. It was here that she met Adria. The two became close, sharing certain traits in an uncanny manner.[1] The cult had been floundering prior to their arrival, so Magdha convinced Adria to poison the leaders of the Coven so they could take control.[2] Afterwards, they reforged it into a dangerous new order that practiced torture and Demon summoning. It is said that these witches were fueled by the belief that they were destined to become mortal heralds of the Burning Hells.

Years later, the two had a falling out and Adria left the group.[1][2][3] Years after the event, Adria claimed that Maghda had become too complacent.[4] Her departure nearly tore the cult apart and left Maghda wracked by jealousy and rage. Fuelled by her dark emotions, she redoubled her efforts to contact the Burning Hells. At some point, they made contact[1] with Belial, Lord of Lies, and they pledged themselves to his service.[3] Under Maghda, the Coven expanded its influence back into the East, in the deserts around Caldeum.[1]

Sword of the Stranger

"There is a new piece to the game, a girl named Leah. My spies tell me she is the child of the witch Adria, who is hiding in the deserts of Caldeum. Bring this news to the master at once."

With a Falling Star crashing into the Tristram Cathedral, the dead stirred around New Tristram. Alongside the fall were three pieces of a sword that had splintered off from the fireball. As per her master's interests, Maghda was intent on retrieving them. However, The Nephalem was also searching for them. After they killed some of cultists and retrieved the first shard, she appeared before them as a ghostly apparition, mocking them, and letting slip the location of the second shard at the Drowned Temple. In truth, this was intentional, as Maghda wanted the heroes to unseal the temple for her, before she sent in her minions to strike.[5]

The Nephalem gained access to the temple, and found the second sword fragment. Maghda's apparition again appeared before them, mocking The Nephalem. However, she noticed the presence of Leah beside them, whom she recognised as being Adria's daughter. Perturbed, Maghda ordered her forces to launch their ambush, but were again defeated.[6]

The third piece resided in the village of Wortham. This time, Maghda and the Coven beat their foe to the sword piece, and burnt the town and slaughtered its inhabitants in the process. Appearing as an apparition to the Nephalem, she revealed that she had captured all three pieces as well as the Nephalem's allies—Leah, Deckard Cain, and the Stranger who had been found in the Tristram Cathedral.

In Cain's House in New Tristram, Maghda and her cultists constrained their foes. She ordered Cain to use his Horadric arts to reforge it, or he could see Leah die, torturing the scholar for good measure. Unleashing her demonic powers, Leah killed the other cultists, leaving only Maghda standing. She disappeared with the Stranger as her captive. Cain later succumbed to the wounds Maghda had inflicted on him.[7] Maghda fled to the highlands.[8] Around this time, she ordered that Belial be informed of the existence of Leah, whom she knew to be Adria's daughter.[9]

Maghda was pursued by The Nephalem, who entered Leoric's Manor, fighting their way through her cultists. She ordered them to hold The Nephalem off, while she prepared their demise in the manor's depths.[8] There, she summoned The Butcher, and set it loose. The Chosen reflected that Maghda must have become desparate to summon such demons. Regardless, The Butcher was defeated, but Maghda was able to escape.[10]

Shadows in the Desert

"Maghda, This "hero" means to attack you in Alcarnus. If I were you, I would set a trap at the Khasim Outpost, but I am not you. For all I know, you wish to fail me again and force me to kill you. That would grieve me, though somehow...I think I could manage it."

After the events in Khandruas, Maghda entered Kehjistan, specifically the deserts around Caldeum. She headed for Alcarnus, blocking the road behind her. The Nephalem engaged in pursuit.[11] Belial ordered her to set a trap at the Khasim Outpost,[12] where she was planning to sacrifice Captain Davyd and other Iron Wolves to her master. The Nephalem pointed out that Belial had used Maghda as bait to draw them away from Caldeum, a revelation to which Maghda didn't react kindly to, yelling that Belial would never betray her.[13] The ambush failed, displeasing Belial even further.[12] Maghda was shaken by The Nephalem's claims that Belial had shaken her.

Finally, The Nephalem caught up with Maghda in her lair in Alcarnus, where she and the Coven had been torturing and massacring the villagers. Maghda gloated that while the Nephalem had hunted her, Belial's Imperial Guard had kidnapped Leah. The two did battle and Maghda was killed; the death of Cain was avenged.[14] After her death, Maghda's soul was tormented.[15]

Maghda's activities in the period between Diablo II and Diablo III will be touched on in Diablo Immortal.[16] She will appear in the game itself.[17]

Maghda appears as a boss in Act II of Diablo III. Unlike most bosses, she has not one, but three sets of tactics, one for normal fight in Alcarnus and two more for her Uber / Cursed Chest fight.

In her normal fight, the battle is a large arena filled with impassable pillars and pits. The battle starts after a short cinematic once the player enters a Coven circle in the middle.

Lair of the Witch Fight

Maghda is one of the six Boss Monsters of Diablo III to have an Uber appearance: The Merciless Witch, Soulless Heathen. She fights alongside the Uber version of King Leoric, King of the Dead, and can drop the Writhing Spine / Leoric's Regret upon defeat.

She will have no enrage timer in her Uber form.

In this fight, Maghda will only use Spit and Swarm of Flies abilities, but needs to be killed in 45 seconds.

On Torment difficulty, Maghda has no Enrage timer, but unless killed quickly, her Corrupted Vessels will overwhelm the player in time, as it is nearly impossible to kill them all before they become possessed on adequate difficulty.

"Adria and Maghda. Two as one. Bound together as the Lesser Evils Duriel and Andariel are. They gave our lives meaning, and in return asked only for devotion. There was nothing we would not do for them. Nothing they would not do for one another."

— The writing of one of the Coven's former members.(src)

Maghda was a malicious and fanatical individual, unopposed to sacrificing her followers in order to achieve her goals. She was devoted to the Coven, and practiced in the arts of witchcraft. She was devoted to Adria.[1] Adria considered herself to be more powerful than Maghda, but noted that did not necessarily make her the greater of the two. That while she brought raw power to their partnership, Maghda brought insight.[4] She had the ability to project an apparition of herself and communicate through it.[6]

Maghda had very pale white skin, draped in an elegant purple dress and headdress. Two butterfly-like creatures clung to her shoulders, providing her with ability to hover above the ground.[19]

Maghda displayed a sadistic streak and would often taunt her foes.[19] She also displayed a gullible streak when she refused to believe that Belial would betray her.[13] 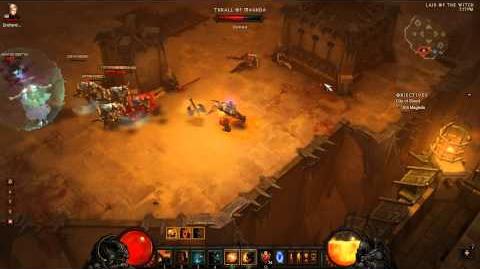