Start a Wiki
For the similarly named character, see Lysra.

Hand of the Prophet (formerly)

Lysa was a servant of the Vizjerei and later, member of the Hand of the Prophet.

The Hand of the ProphetEdit

Lysa grew up during the Mage Clan Wars.[1] During her youth, Lysa and her sisters were the servants of a Vizjerei mage. Eirena, one of Lysa's sisters, secretly read their masters spell books and taught her siblings, though the first spells they learned were nothing more than tricks.[2] One time Eirena miscast a charm spell, causing Lysa to fawn over her for a day.[3] Ignorance and bliss ended however when she and her sisters learned that their master had begun to summon demons.[2]

Upon learning this, the sisters waited until their master and more mages joined together in a ritual to summon a greater demon in reality. Knowing of the mages' evil, Lysa and her sisters used their magic to kill the mages before they could complete their ritual. However, they cursed them with their last breaths, and it seemed that they too would fall. A man called the Prophet saved the sisters however, using his powers to heal them. He commended them on their deeds, and offered to train them further. They accepted.[4]

The group was called the Hand of the Prophet. However, the Prophet himself foresaw a great disaster that would occur fifteen hundred years in the future, and Lysa and her sisters pledged their lives to preventing the tragedy. The sisters’ pledges were far from mere words, and the Prophet placed the entire sisterhood in a magical slumber to preserve them until the appointed time.[1] A time where they would aid a hero in that time.[3]

Eirena was reunited with her once thought dead sister, when she followed the voice of their other sibling she'd been hearing in Pandemonium. There, Lysa revealed the truth of their sisters' deaths to the already shocked Eirena —Eirena was chosen by the Prophet as the most powerful of their sisters, and the one who needed to survive above all else. He revealed this to the rest of them, giving them the choice of either leaving, or entering the slumber with knowledge that they are all going to give their lives to protect her when the need arose. Lysa was jealous of her sister for not being chosen and conspired with demons to kill her, betraying the Prophet. Their sisters then sacrificed themselves to protect her just as the Prophet predicted they would. When Eirena and The Nephalem ventured into the Pandemonium, they followed Lysa's voice, which proved to be a trap: souls of the slain sisters, dragged to the Lair of the Prophet, were supposed to lure Eirena into the jaws of death. When other demons failed, the corrupted Lysa turned into a demonic creature in an attempt to kill her shocked and guilt ridden sister, but was slain by her and the Nephalem.[5]

In the Lair of the Prophet, the Nephalem will have to face Lysa, The Corrupted Enchantress, in combat. She is a Unique Succubus, having no special affixes, but being able to use all of Eirena's skills. Demons (mostly Armored Destroyers) constantly come to her aid. The moment combat starts, she blocks the exit, cutting all ways back. After her death, the quest is completed, and the Prophet reaches Eirena with his final words. 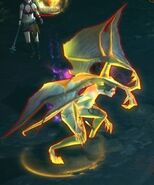 Lysa close-up
Add a photo to this gallery

Retrieved from "https://diablo.fandom.com/wiki/Lysa?oldid=177066"
Community content is available under CC-BY-SA unless otherwise noted.