Diablo Wiki
Register
Don't have an account?
Sign In
Advertisement
in: Pages with reference errors, Article stubs, Nephalem,
and 2 more

"A magical prodigy from an early age, Li-Ming was once a standing-out pupil of Caldeum's prestigious Yshari Sanctum. Fully convinced she was a hero prophesied to defeat the Legions of Hell, she left behind her teachers and traveled the world as a renegade wizard — a master of limitless arcane power. "

This section is a stub. You can help the Diablo Wiki to become more awesome by expanding it.

Li-Ming was born in Xiansai c. 1266[1] and was brought to the Yshari Sanctum by Isendra at the age of seven. Valthek took her training under his personal control after he has caught her looking into the forbidden archives and studying forbidden spells. From the first days, Isendra believed that a prophecy was actually talking about Li-Ming, even though everyone except the two of them had been quite skeptical.

Like Isendra herself, Li-Ming dismissed most of the warnings, and refused to ignore the needs of people around Caldeum. At the age of 16, she saved the city of Lut Bahadur from drought by bringing water back. However, the Mage Clans' attention was focused on Isendra — they believed that she was influencing Li-Ming.

Li-Ming discovered Isendra's mangled body shortly after the Sorceress was assassinated in the eastern desert. Questioning Valthek, she concluded that Isendra died unnaturally, and eventually confronted him about this. Even though he tried to stop Li-Ming, she left the Sanctum after besting him in combat (with relative ease, due to the secrets she uncovered).

After Isendra's death, Li-Ming (now age 20) ventured to New Tristram, pursuing a sighting of a fallen star. Valthek dispatched an Assassin to eliminate her, despite his misgivings.[2] As she left, Li-Ming sensed that strange things were afoot in Caldeum.[3]

Li-Ming can be considered to be the canonical version of the Wizard character class for Diablo III. In her dialogue, she often exclaims disrespect and annoyance of her former mentors (except Isendra), stating that perhaps they will change their mind about her when they learn of her deeds as The Nephalem.

Valthek's Rebuke staff is stated to have disappeared shortly after "an incident" with the "rebellious student" (i.e. Li-Ming). However, it is unlikely that she stole it. Enchantments on The Twisted Sword are stated to be made by Li-Ming.

For more information, see the respective article on Heroes of the Storm Wikia

"It’s a generally agreed upon fact of life among the denizens of Sanctuary that wizards and magical mayhem are never far apart. Although she understands people’s concerns, Li-Ming is entirely unapologetic for the destruction in her wake. She delights in unleashing devastating spells on her foes from afar, then teleporting away to frustrate her enemies’ attempts at striking back. Small minds may fear this kind of power, but Li-Ming wields the arcane forces of the universe with confidence and unmatched skill."

Li-Ming appears in Heroes of the Storm as a Wizard class representative.

She retains Archon, Disintegrate, Teleport, Arcane Orb, Wave of Force, and Magic Missile skills, and her passive trait, Critical Mass, allows her to reset cooldowns on kills. Nearly all of her talents are named after, and work like, various items, skills and skill runes in Diablo III.

She is encased into full Balor Armor with respective tier components. For Archon skin, she wears Archon Armor. Her source is pre-2.0 Oculus, and wand is a recolored version of Chantodo's Will. 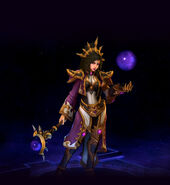 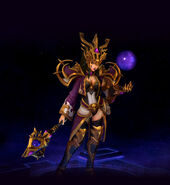 "You gained quite a reputation from your youth in Caldeum! You don't seem half as bad as they say."

Li-Ming is extremely sure of herself and frequently boasts of her superior power and skill when in battle.[2] The term "Wizard" is often given to Mages with rebellious attitudes or an obsession with power. Li-Ming displays a little of both and she's hardly ashamed of it.[4]

During her time as a student, she often showed disobedience, studying the arcane arts much for herself, without guidance (or permission) from her superiors, being particularly interested in magic of time and space distortion.[2] Many teachers told her that she was full of herself.[4] By the end of her training, she was able to single-handedly beat the magisters in combat.[2]

Many other students were fascinated by Li-Ming. Delsere even swore that she would one day wear his masterpieces.[5] She was fond of Deckard Cain.[6]

Magic has always come easily to Li-Ming.[4] She was prone to experimentation with magic and even Valthek agreed that she was a genius (though he denied ever admitting it).[7]